Vanessa Beeley, a British journalist known for her outspoken views on Syria, spoke to a gathering of more than 100 persons in Montreal December 10, 2019.

A meeting planned the day before at University of Montreal was cancelled after a successful campaign by anti-Assad forces to bar her from speaking.

For me, attending Beeley’s talk was a question of principle: to oppose an attempt to shut down debate on an issue that has divided the left.

END_OF_DOCUMENT_TOKEN_TO_BE_REPLACED 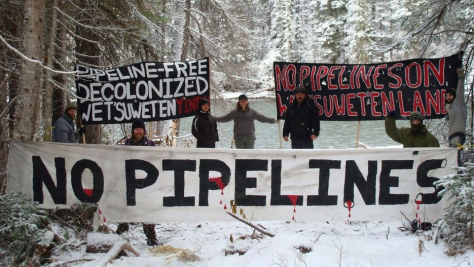 Socialist Action condemns the outright violation by Liberal Prime Minister Justin Trudeau, and BC’s NDP Premier John Horgan, of the United Nations’ Declaration on the Rights of Indigenous Peoples (UNDRIP) rules in dealing with the indigenous peoples on resource development projects on Indigenous lands in BC. Those rules establish:

1. Self determination for indigenous peoples, including the absolute right to say NO to capitalist resource projects.

2. The right to Indigenous traditional forms of governance.

3. Control over their own lands and resources.

4. Control over waterways, railways, highways and pipelines on indigenous lands.

6. Freedom from the removal by force or otherwise of indigenous children.

In spite of their declared support for UNDRIP, Trudeau and Horgan have violated, or threatened to violate every single one of those provisions. Their policies continue the historic policy of intimidation, force, economic deprivation and imprisonment, to rob the wealth of indigenous lands for wealthy white capitalists at the expense of indigenous men, women and children. It is a vicious and utterly dishonourable history and it must stop NOW.

END_OF_DOCUMENT_TOKEN_TO_BE_REPLACED

Comrade Cory D. spoke for Socialist Action Canada to about 350 people at a rally held in Toronto on January 4 to protest the U.S. assassination, in Iraq, of Iran military commander Qasem Soleimani.  See the attached video and photos.
About ten members of SA, with red flags, were joined by members of several other leftist groups and representatives of unions and the NDP.  Beaches-East York NDP MPP Rima Berns-McGown also addressed the crowd.  A tiny counter-demo of Trump supporters failed to disrupt the anti-war protest as they were held off by rally marshals and police, across the street from the U.S. Consulate on University Avenue.
CP24, NOW magazine and other mainstream media interviewed Corey, Garv T. and others.
Organizers announced plans for a protest to be held on Saturday, January 11, from 12 to 2 p.m.  In the event of a full-scale war, people are urged to rally at the same location on that day, or the next day, at 5 p.m.
No War with Iran!  Drop the Sanctions!  All U.S., Canadian, EU and allied troops Out of the Middle East!  Canada Out of NATO!  End all investment and trade with Saudi Arabia and Israel!  Imperialist Hands Off Iran!
Here is the link to the video and below the Pix from facebook

Eight hundred delegates met in Victoria, November 23-24, to assess two years of NDP government in British Columbia and to consider policies to meet the needs of working people, the poor, the homeless and oppressed.

The affordability crisis has aggravated homelessness and drug addiction, particularly in the warmer climes of Vancouver and Victoria, where Canada’s marginalized and victimized tend to end up. Inflation in BC is 2.4% compared to 1.4% across Canada.

The minimum wage will rise above the B.C. Federation of Labour target of $15 an hour by 2021, 4 years after the NDP won government.

END_OF_DOCUMENT_TOKEN_TO_BE_REPLACED

New Brunswick has stolen $20 million from the purchasing power of social assistance recipients in the last five to ten years, according to the New Brunswick Common Front for Social Justice, a group that fights to eradicate poverty. Single, employable individuals in New Brunswick receive only $537 monthly in social assistance, a rate which has been frozen since 2010.  Other recipients have not received any increase in their basic rate since 2014.  Making up for this loss, though not a solution to inequality, is an urgent necessity to alleviate the daily suffering of impoverished working class folks.

To address this issue, the Common Front just established a new chapter in Saint John. It recently launched a campaign to engage politicians about the rates.  Only one MLA has responded to requests to discuss the issue. The organization says it is sending letters to dozens of unions and organizations asking them to assist in the cause, according to Common Front organizer, Jean Claude Basque.

Meanwhile, the struggling New Brunswick NDP announced it has formally recognized the Socialist Caucus to create policies that can be presented at the next provincial policy convention. It also hopes to establish Youth, Labour, Environmental and Women’s Caucuses. Party insiders say the initiative will revitalize the party, which did not win any seats in NB in the last federal and provincial elections.