New Brunswick has stolen $20 million from the purchasing power of social assistance recipients in the last five to ten years, according to the New Brunswick Common Front for Social Justice, a group that fights to eradicate poverty. Single, employable individuals in New Brunswick receive only $537 monthly in social assistance, a rate which has been frozen since 2010.  Other recipients have not received any increase in their basic rate since 2014.  Making up for this loss, though not a solution to inequality, is an urgent necessity to alleviate the daily suffering of impoverished working class folks.

To address this issue, the Common Front just established a new chapter in Saint John. It recently launched a campaign to engage politicians about the rates.  Only one MLA has responded to requests to discuss the issue. The organization says it is sending letters to dozens of unions and organizations asking them to assist in the cause, according to Common Front organizer, Jean Claude Basque.

Meanwhile, the struggling New Brunswick NDP announced it has formally recognized the Socialist Caucus to create policies that can be presented at the next provincial policy convention. It also hopes to establish Youth, Labour, Environmental and Women’s Caucuses. Party insiders say the initiative will revitalize the party, which did not win any seats in NB in the last federal and provincial elections. 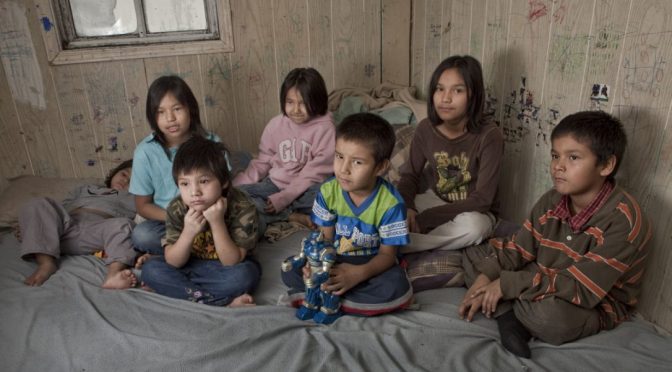 A report by the Canadian Centre for Policy Alternative found the richest half of Ontario families raising children took home 81 per cent of earnings in 2013-2015, leaving the bottom half to share 19 per cent.

For families in the bottom half, the rise in precarious and low wage work has meant touch choices.

Even trips to the grocery store can mean choosing between shampoo and household cleaning supplies, said Daley, who advocates for living wages through the Hamilton Round-table for Poverty Reduction.

Bill 148, the so-called Fair Workplaces, Better Jobs Act, proposes raising the minimum wage from $11.40 to $15 by 2019, along with changes supposedly to make it easier to join a union.  Socialists advocate $18 an hour minimum wage now, and automatic union certification in every work place where over 50 per cent of the employees sign up to join a union.

Lack of food, not the incidence of crime and gang violence, is the biggest reason people are fleeing El Salvador, Honduras and Guatemala for the southern border of the United States, and parts farther north.

“The impact of climate change is very drastic in the Dry Corridor and particularly in El Salvador,” that country’s foreign minister, Hugo Martinez, said on August 23.  “In 2015 alone, we lost 470,000 tons of maize and about 6,000 tons of beans.”

The corporate media is full of stories alleging widespread malnutrition in Venezuela, where the right wing opponents of left-populist President Nicolas Maduro are guilty of hoarding, and even destruction of food and other basic supplies.  Yet there is little coverage of more desperate conditions in countries where Washington and Ottawa are not promoting regime change.

Photo: One of the areas most affected by extreme hazards, in particular natural hazards, is the Dry Corridor of Central America, with recurrent droughts, excessive rains and severe flooding affecting agricultural production. Photo: FAO

We are seeing a revival of the concept of basic guaranteed income (BI or GAI), both in Canada and internationally. The Ontario Liberal government is about to launch a pilot project. Prince Edward Island will do likewise, while other provincial administrations have expressed interest. Finland initiated a basic income experiment in 2016, and The Netherlands is soon to follow.

Basic income has its supporters and detractors on both left and right. Free-market and libertarian ideologues like Milton Friedman and Charles Murray see the possibility of eliminating publicly funded entitlements in favour of impoverished members of the working class having to purchase those services in the market. On the other hand, many conservatives fear a disincentive to work.

Positions on the left also vary. Basic income has been promoted as a solution to precarious work in the gig economy, as a way of liberating impoverished people from an oppressive welfare bureaucracy and as a panacea for the work-less world that some predict will result from robotization. But there are many who believe basic income in the current context is illusory.

Some on the left propose a ‘progressive’ version of basic income that would provide a net advance over existing benefits. No one wants to defend the current system of social assistance with its paternalistic bureaucracy and grossly inadequate level of support. A socialist society would guarantee decent social provision for all. The question of what form this should take remains hypothetical at this point.

Those advocating a ‘progressive’ version of basic income are acting from genuine concern for the impoverished, and frustration with the injustices of the current social welfare system. But in the harsh world of actually existing capitalism, basic income schemes offer the illusion of improvement in the lot of marginalized people while streamlining the existing social welfare system so as to diminish state responsibility and push individuals to purchase their needs privately.

Absent a socialist transformation, basic income schemes will reflect the priorities of capitalist governments. They will be grafted on to an austerity and privatization agenda. The aim is to move the impoverished into low wage precarious employment, provide a wage top-up to employers and give governments an exit route from services they currently provide. Ontario Liberal Premier, Kathleen Wynne sees basic income as a way of reducing government expenditures in housing, health care and other supports for the poor. Finland’s centre-right wing government will judge its basic income experiment on whether it moves the chronically unemployed into taking low wage jobs.

Labour has been on the defensive for almost 50 years. The relationship of class forces does not favour significant democratic or egalitarian policies orchestrated from above.

Labour’s traditional approach has been to fight for full employment at union rates, for a significant rise in the minimum wage, for adequate social assistance and unemployment benefits and for social entitlements that apply to the whole working class including impoverished and marginalized people. The labour movement has recognized the danger in means tested programs that break with the principle of universality.

It is naive to think that basic income can circumvent the capitalist labour market or transform the use of leisure time.  The real transitional demand here is for a reduction in the work week with no loss of pay and a sharing of work. Within that framework, massive retraining and expansion of unionized employment in green and socially useful occupations is the route to go.

Some sort of income guarantee would be integral to a socialist society. But this would not be the principal mechanism for social provision. Cuba gives us a glimpse. Basic needs such as housing, transport, health care and education are provided out of central state revenues and are free for every Cuban at the point of use or in some cases as a subsidy. There is a big difference between social programs as universal entitlements provided out of a collective pooling of resources, and services obtained by individuals from private providers as a market transaction. Both may exist, but any aspiring socialist society would and must try to limit the commodification of basic services.

If introduced by capitalist governments, as looks increasingly likely, basic income schemes will require the labour movement and socialists to respond.  Socialist Action will evaluate any specific basic income program according to:

In formulating its position. Socialist Action should not lag behind the most advanced elements in the labour movement who are highly critical of basic income (see John Clarke’s and David Bush’s arguments and the positions adopted by CUPE Ontario and OPSEU).

To summarize, for the foreseeable, basic income will be initiated from above by capitalist governments requiring a response on our part. But we believe the main battles lie elsewhere.  What the working class gains, it has to fight for. We look to advances in the class struggle to better conditions for the impoverished. Battles for unionization, higher wages and benefits, mobilizing to obtain decent social housing, to abolish barriers to higher education, to win free public transit and defend the most vulnerable and exploited workers – that is the way to strengthen the confidence, self-organization and unity of working people and change the balance of forces in society.

At the end of May, the Ontario Liberal government announced “sweeping” labour law reforms, inclining them to bask in the glory of their freshly appropriated “progressive values”, eliciting the ire and indignation of Conservatives, while causing New Democrats to utter a collective “well, duh!”