Well, Toronto Pride has done it again. On October 16 it held a news conference to announce that uniformed police will again march in the Pride parade.  The decision was made solely by its Board, not presented to Pride’s membership for either discussion or vote. The news conference was a joint project with cop top boss Mark Saunders and Mayor John Tory. In a video of the event published by Xtra, Pride Executive Director Olivia Nuamah consistently evaded detailed questions.  She insisted that the decision was based on “community consultations” without ever specifying who comprised this “community” that was allegedly consulted. Since it didn’t even include Pride’s own membership, we may well wonder! Nuamah referred more than once to Pride’s “partnership” with the police.

Obviously, great pressure from the police, the mayor and Ontario Premier Thug Ford was brought to bear. But the rightward direction of the Pride leadership has been evident for years, as it continues to distance itself from the “community” it supposedly represents. In 2016, when Black Lives Matter temporarily halted the march to protest the massive police presence in it and to highlight other serious issues, one of the major concerns was the intimidating nature of the police presence, particularly to marginalized sectors in the LGBT population in the parade. This important issue has been shoved aside in the interest of “partnership” with the mechanism of state repression, and, presumably, funding. (To quote an old Bob Dylan song: “money doesn’t talk, it screams”.)

This outrageous betrayal completely ignores the role of the police as the praetorian guard of power and privilege and as an oppressor of queer people, racialized minorities, sex workers and the homeless. (It also undercuts other Pride organizations which have removed the police from their parades.) As James Dubro, a long-time gay activist points out, the announcement of this change was made without notice, and predicts that “they’re setting it up for major confrontation”. And he’s right. Opposition is already growing and it will be massive.

Apparently, Toronto Pride honchos are completely oblivious to the growing resistance to the viciously right wing Doug Ford-led Ontario government, resistance which will dovetail with opposition to their abjectly opportunist move.

Some (mostly) good news for a change! One is local to the GTA. Arising out of the effective resistance to a police campaign of anti-queer harassment and arrests in Marie Curtis park, all contested charges have been dropped. This is the result of strong local community organizing in the area, a development that likely would not have been possible even in the recent past. This suggests the growth of self-confidence and willingness to act in the public arena on the part of the local LGBT community and allies, which is really encouraging.

The other victory is in the federal arena: Prime Minister Trudeau’s apology for the decades-long vicious campaign by the RCMP and the military to eliminate gays and lesbians from the civil service and the armed forces. Between the 1950s and the 1990s, the Canadian state conducted widespread spying against queer people, firing numerous people simply on the basis of their sexuality, tried to intimidate them into giving information on others, destroying careers and lives along the way. (There were suicides that resulted from this witch-hunt.)

While Trudeau’s apology is fairly wide-ranging, it is also defective and lacks honesty. He attributes this atrocity to “the thinking of the time.” This was a deliberate and calculated policy orchestrated by the highest levels of the federal state. And the apology is the result of decades of protest organized by queer activists and their allies, not the implied generosity of the government. Money has been allocated to compensate people grievously harmed by this campaign. But it is too late for many. And if compensation is handled the same way as it has been in the case of the atrocity of residential schools, people will wait a long time to see any money. The promised expungement of criminal records involving consensual sex does NOT include convictions for violating the medieval bawdy house laws under which hundreds were arrested, as in the infamous Toronto bathhouse raids.

So, while the apology is a victory for queer communities, it is not an unqualified one, and major issues have not been addressed. Among these is the ongoing prohibition of gay men donating blood and the continuing criminalization of HIV. The struggle continues.

a review by John Wilson

The Danish Girl (2015, 1 hr. 59 min., directed by Tom Hooper) is a mesmerizing, moving account of how transgender pioneer Lili Elbe (originally Einar Wegener) came to be one of the first persons known to have gender reassignment surgery. Adapted from David Ebershoff’s 2000 fictionalized novel, it features Eddie Redmayne’s amazing performance as Einar. He discovers who he really is, and transitions into Lili. Alicia Vikander, as Einar/Lili’s wife, is brilliant in her almost equally demanding role, at times becoming the central focus.

The film is mainly situated in a lush, 1920’s middle class Copenhagen where Einar is a celebrated landscape artist. Wife Gerda is also an artist. She fights for recognition – until she starts painting the emerging Lili as a femme fatale, which started with a whimsical, half-joking sitting by Einar for her as a female model.

But for him this is the start of his self-realization as Lili.

Lili endures horrific experiences consulting with “experts” in the biased and prejudiced medical system who are determined to “cure” her, or banish her to a psychiatric facility. Then she meets Dr. Warnekros (Sebastian Koch) who proposes what he candidly described as experimental and risky gender reassignment surgery. Of all the doctors, only he seems to have a sympathetic understanding of what she is going through. (Since Lili, who was raised in a context of relative class privilege, suffered such difficulty, can we imagine how truly impossible would be the situation of a transgender person born to a working class family?)

Gerda is steadfast in her love and support for Lili – despite being very conflicted and confused by a process she knows will lead to her losing her husband.

In short, this film is well worth seeing. It comes at a time when transgender issues are finally gaining prominence – thanks to decades of LGBTQ activism. Despite ongoing challenges of medical access, the cost of surgery, and persisting prejudice, in Canada and elsewhere real gains are being made. In revolutionary Cuba, the treatment is free. We should note, though, that with all the attention that this film is deservedly getting, other pioneering films, such as Transamerica, are being overlooked.

Warmest solidarity greetings from Socialist Action/Ligue pour l’Action socialiste for Pride Week 2015.  We celebrate the growth of queer liberation internationally.  The latest victory is the spectacular referendum win for same sex couples on May 22 in Ireland.  62.1% of the votes cast approved gay marriage, making Ireland the 20th country to do so, the first by popular vote.  It was a serious blow to the Catholic Church, which blocked divorce, abortion and helped to keep homosexual acts illegal – as recently as 22 years ago.

But let’s remember that there are vast areas of the world where things are actually getting worse, notably some African countries and now-capitalist Russia. END_OF_DOCUMENT_TOKEN_TO_BE_REPLACED

Warmest solidarity greetings from Socialist Action/Ligue pour l’Action socialiste for World Pride 2014. While we justifiably celebrate the growth of queer liberation internationally, and its victories and gains, let’s remember that there are vast areas of our world where things are actually getting worse, notably some African countries and now-capitalist Russia. 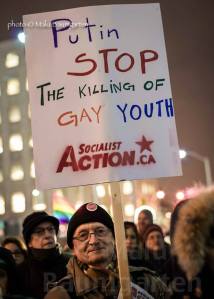 march in Toronto against the Putin regime’s anti-gay law. Our speaker at the rally noted that the early Soviet Republic was the first state in the world to decriminalize homosexuality and abortion. Sadly these gains were reversed in the 1930’s with the consolidation in power of the privileged, self-serving party-state bureaucracy headed by Joseph Stalin and his murderous security apparatus — of which Vladimir Putin is a direct descendant. While acknowledging its repressive past on queer issues, it is no accident that today, among “less developed” countries, revolutionary Cuba leads the way.
In Canada and Quebec, we have made significant gains through decades of struggle, but there is far to go. Look at Ontario. Last year the furor over Blue Jays baseball player Yunel Escobar’s anti-gay slur demonstrated an increased awareness of homophobia. This increased awareness has several sources. At its heart is the determined struggle by queer rights activists and their allies resulting in victories on two fronts. The passage of “Toby’s Law” mandated inclusion in the Human Rights Code of gender identity and gender expression. The Accepting Schools Act addressed the issue of anti-gay bullying in the schools, particularly in Catholic schools. 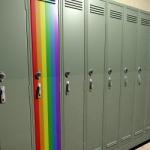 However, a federal law regarding transgender rights remains stalled in the non-elected Senate. And reactionary Catholic school boards continue to stall and obstruct the formation of Gay-Straight Alliances (GSA’s). As with all human rights “protections”, enforcement is key. We call on all human rights supporters to demand dissolution of Catholic schools into a single, secular school system. Not only would this advance the interests of LGBT students and other minorities. It would save up to $1 billion a year that could be better spent in classrooms.
The scandalous rise of homelessness is another issue that particularly affects queer communities and other minorities. We demand that Kathleen Wynne’s Liberal provincial government, and municipal governments, provide safe spaces for all the homeless, especially street kids, among whom queer youth are heavily over-represented. Lives are at stake.
The health system is another issue. The government’s priority is ever more cuts and privatization (including the notorious P3’s) while the system remains largely unresponsive to the needs of LGBT people and other minorities. We have to stop this.
While our struggle on these issues and many other fronts continues, we also need to look at what

kind of society we want, and what we actually have. Queer rights will never be safely ensconced in the capitalist system. “Divide and rule” remains the practice of the tiny, obscenely rich minority who call the shots in the economy and the state. The massive income inequality gap continues to grow, and won’t be reversed until we take mass action.
Bay Street governments have done, and will do nothing to address this, despite uttering hypocritical “anti-poverty” mantras. The present provincial government does not even support a liveable minimum wage. It has offered only miniscule increases in the abysmally low “welfare” rates, while pretending to prepare people for jobs that don’t exist.
In a socialist society housing, food, education (at all levels!) and healthcare will be human rights, as they are today in Cuba, despite the U.S. blockade and very limited resources. Public ownership and workers’ democratic control of the commanding heights of the economy are essential for production to be for human needs, not for private profit. We invite you to join us in this fight.
Socialist Action / Ligue pour l’Action socialiste www.socialistaction.ca    Call: 647 – 986-1917.   E-mail: socialistactioncanada@gmail.com