Skip to content
by Barry Weisleder
We are on the threshold of momentous change. Around the world working people are deeply dissatisfied with the status quo. We face endless economic crisis, endless wars abroad, and ever-rising surveillance and repression at home. We see fabulous wealth accumulation for the super-rich, and bitter austerity for the rest of us. We witness merciless plunder of our fragile environment by a profit system that threatens the very survival of civilization. The signs of discontent are everywhere.
The latest is Jeremy Corbyn’s decisive win to become Leader of the British Labour Party. This is a blow against capitalist austerity and a big boost for the working class movement. His left-Keynesian policies open a wider space for advocates of socialist transformation of society. It is also a warning to pro-capitalist leaders of labour-based parties around the world, like Tom Mulcair in Canada’s New Democratic Party, that the rank and file have an appetite for radical change.

Corbyn’s frankly leftist views — he favors a British exit from NATO, re-nationalization of the post office, railway and energy industries, and a possible war-crimes trial for Tony Blair — have long placed him outside Labour’s establishment.

Yet his victory on September 12 was just the latest marker of an extraordinary transformation of the political left, one that is fueled by disenchantment with the traditional parties and their leaders after the failures of the Iraq war and the Great Recession.
In Greece, the Syriza party became the first supposedly-leftist party to govern in the European Union by sweeping to victory in January. Syriza subsequently betrayed the Greek working class, but in the election on September 20 the combined vote of working class parties increased, including that of the Stalinist KKE, and of Antarsya, a revolutionary coalition that has led anti-fascist and anti-austerity movements in the streets.
In Spain and Ireland, left-wing parties are vying for a kingmaker role in upcoming elections. In Scotland, nationalists dethroned the Labour Party, which had been dominant there for decades, by exposing Labour as too timid to challenge the ideology of austerity.
In Canada, the labour-based New Democratic Party is poised to form the federal government, for the first time ever, after the October 19 election. Even if it does not, the old Conservative-Liberal two-party system that dominated Parliament for the past 150 years is now a thing of the past.
In the United States, Bernie Sanders tops Hillary Clinton in New Hampshire polls, and is drawing equal to her in Iowa. Sanders’ bid for the U.S. Democratic Party presidential nomination is a distorted example because the Democratic Party is a ruling class institution. It is the chief instrument of capitalist rule and of imperial wars abroad for over a century. But Sanders’ popularity shows an appetite among millions for radical change.

The BlackLivesMatter and the $15 Now movements are

better examples of independent working class political action. With radical organization and leadership, the drive for fundamental change will not be denied. However, without revolutionary organization, humanity is doomed to a very ugly demise. The millions of desperate refugees from the Middle East and Africa currently on the move give us a glimpse of what’s in store without a social revolution.

Looking at the situation in Canada, what do we see? We see a war not mentioned in the commercial media — a war on wages. Between 1981 and 2011 the real median hourly wage of full-time workers rose by only $2, according to Statistics Canada. Males between 25 and 34 years of age saw almost no real wage gain during those 30 years. Why?
The Bank of Canada, encouraged by Liberal and Conservative governments, worsened recessions in the 1980s and 1990s to reduce inflation by boosting unemployment and squeezing wages. 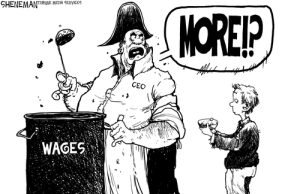 In the mid-90s, another Liberal government gutted Canada’s social safety net. It cut employment insurance and welfare benefits, so the jobless would be desperate to work for any wage.
The weakening of unions is another reason wages have stagnated. Unionized workers make $5.67/hour more than non-union workers. That’s something the bosses can’t stand.
The export of factory jobs has hit unions hard. Today only 30% of the Canadian work force is unionized, down from 38% in 1981. In the private sector, only 17% are union members. Harper’s Conservatives are doing their best to weaken unions more. Law C-377 forces unions to disclose all expenditures, while business and professional organizations are not required to do so. Another law ended the rule that government contractors must pay fair wages. Tories break strikes with legislation, as they did to Air Canada, Canada Post and railway workers. Liberals did it to transit workers and teachers in Ontario. The Tories further reduced access to Employment Insurance. They expanded programmes that allow business to import cheap, temporary foreign workers. The number doubled in just a few years.
It is an outrage that none of the major parties is talking

about the war on wages. None is proposing to make it easier to unionize low-wage workers. None is pointing to the danger to good-paying jobs posed by globalization and so-called ‘free trade’ deals. None says it will scrap the temporary foreign worker progammes. The NDP promises to raise the federal minimum wage to $15/hour. But that would affect only 100,000 workers.
What do we really need? We need a major public works programme to fix the country’s crumbling infrastructure. We need to expand industry under public ownership, coupled with pro-union, work place democracy legislation.
This writer attended a rally for Tom Mulcair in Toronto on September 8 with about 1,000 people. In his speech, Mulcair said he will go as Prime Minister to the COP21 Climate Summit in Paris, November 30 – December 12, to fight for climate justice. But how can he do that if he is open to the construction of the Energy East pipeline, and the continuation of the Tar Sands development?
He said he wants tax fairness. But how can he deliver that by keeping the Tories’ Universal Child Care Benefit and the GST? He said he stands for economic justice, yet he does not oppose the Trans Pacific Partnership Agreement, and the Canada- Europe Trade Agreement. And how can Mulcair commit to a balanced budget, come hell or high water, without taxing corporations and the super-rich a hell of a lot more, or without breaking his promise to establish a national childcare service?
Socialists may succeed in pushing Mulcair to the left. Anything is possible. In 2006 the NDP Socialist Caucus forced Jack Layton to demand ‘Canada Out of Afghanistan’. Last year it won the policy ‘For free post-secondary education’ in the Ontario NDP. And who thought, even a year ago, that the NDP would form the government in Alberta?
The main point is this: to raise class consciousness and advance struggles for fundamental change, socialists need to be organized as such. We need to fight for socialist policies in the unions, in the NDP and other working class organizations.
We urge you to join us in this effort. But let’s be clear: There is no electoral solution. There is no market solution to the crisis of capitalism. The capitalist market created the problem. Only a social revolution can solve it. Only by taking control of the major means of production, like the Cubans did 54 years ago, only by instituting democratic planning, in harmony with nature, does humanity have any hope of survival.