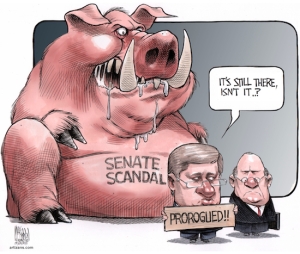 On August 19 the federal Conservative government of Prime Minister Stephen Harper declared its plan to prorogue the Canadian Parliament — for the fourth time.

Harper used prorogation in 2007, but subsequent moves to prorogue in 2008 and 2010 drew the most fire. In 2008, Harper’s minority government used the tactic to prevent the combined opposition from removing him and forming a coalition government. He prorogued again in 2010 in the midst of a controversy over the Canadian Force’s mistreatment of prisoners in Afghanistan, and just prior to the 2010 Winter Olympics hosted by Vancouver.

Before the summer break this year, Harper faced daily criticism in the House of Commons over the ongoing scandal involving the expenses of senators, including three Conservatives he had appointed.

Opposition Leader Tom Mulcair accused Harper of shutting down Parliament to evade accountability and to avoid questions on the Senate.

“People aren’t going to be fooled. This is clearly a desperate government worn out by ethical scandals and mismanagement. Stephen Harper refuses to answer legitimate questions from the public,” the NDP leader said.

Senate reform legislation is just one of several bills that will die on the order paper with prorogation. The government is awaiting a Supreme Court opinion on Senate reform that could come in Fall 2013. The NDP is presently conducting a commendable cross-country campaign to abolish the Senate.

Prorogation would not affect the Auditor General’s review of Senate expenses. However, the recommendations of a Senate report concerning Senator Pamela Wallin’s expense claims would be on hold until they are adopted by the full Senate. That can’t happen while Parliament is prorogued.

Other affected legislation includes changes to the Canada Elections Act to establish new rules for political loans, and a bill to change parole rules for offenders found not criminally responsible for their actions.

However, these bills can be reintroduced at their most recent stage in the House of Commons.

A private member’s bill that would require labour unions to publish detailed financial information, known as Bill C-377, would be restored to third reading, the last stage completed by the House of Commons.

The bill, strongly opposed by the Canadian Labour Congress and its union affiliates, had been the subject of heated debate in the Senate, where it was amended and sent back to the House of Commons. But prorogation would wipe the slate clean as far as the Senate deliberations are concerned, according to the Library of Parliament.

“Thus, the bill would be sent back to the Senate in the same state it had been when it was passed at third reading by the House in December 2012, prior to the Senate amendment,” the library said in an email to The Canadian Press.

“The Senate would then begin the process of considering the bill anew; the Senate may vote to pass the bill unamended, amend the bill in precisely the same way it had been amended before, or introduce entirely new amendments.”

Harper’s frequent use of prorogation does more than add an arcane word to everyday political jargon; it shrinks and withers bourgeois democracy so its henchmen can serve more ruthlessly the capitalist austerity agenda. This is what some call the new authoritarianism – replete with increasing state surveillance of the population, curtailment of the right to strike, arbitrary police beatings and detentions, expulsion of refugees, and strident promotion of the military. It must be stopped – not just the P word, not just Harper, but the system that drives this descent into a living hell for working people.

– BW, with notes compiled from Wikipedia.