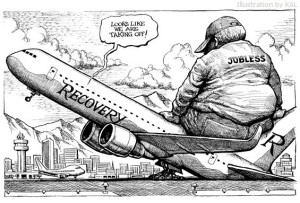 Chronic job insecurity, uneven growth and declining living standards mark the so-called recovery from the Great Recession that killed so many jobs in 2008-09. Statistics Canada reported in mid-August that, while the private sector gained 34,600 jobs, the public sector lost 74,000. The net loss of 39,400 belies the claim of Conservative Finance Minister Jim Flaherty that his government’s austerity policies are working.

But it’s worse than that, according to Citizens for Public Justice, a faith-based social action organization that produced a sophisticated study of labour market trends since 2008. It paints a grim picture:

Although the official unemployment rate is 7.2 per cent, it is actually 10.3 per cent if ‘discouraged workers’ (those who have given up their job search in frustration) are included.

In April 2013, there were six unemployed workers for every job vacancy.

Temporary, contract and casual work grew by triple the rate of permanent employment since the recession.

Workers are unemployed for a longer time. In 2008, the average job seeker took 14.8 weeks to find work. Today it takes her/him 20.3 weeks.

Young people are very hard hit. In July, they lost 46,000 jobs; more than any other group. Their unemployment rate is 13.9 per cent, officially. But it jumps to 19.8 per cent if discouraged workers are counted.

Certain sectors have done better, including construction, health care and natural resources (in the latter case, at what cost to the environment?).

The CPJ urges “significant action to tackle labour market disparities and improve job quality.” But it does not specify what actions are needed.

With billions of dollars in “dead money” hidden in corporate coffers, untaxed off-shore accounts, mega-mergers and acquisitions, there is no lack of capacity to generate jobs to meet human needs. All that stands in the way is the outmoded system of private ownership of the means of production.