Workers in Unifor Locals 112 and 673 at the Dash 8 De Havilland plant in Downsview, Toronto launched their strike for stability and security on July 27. The 700 workers raised the slogan “Whose Plant? Our Plant!” in response to the arrogance of the oligarchs to decommission the plant and move it out of the Greater Toronto Area (GTA). 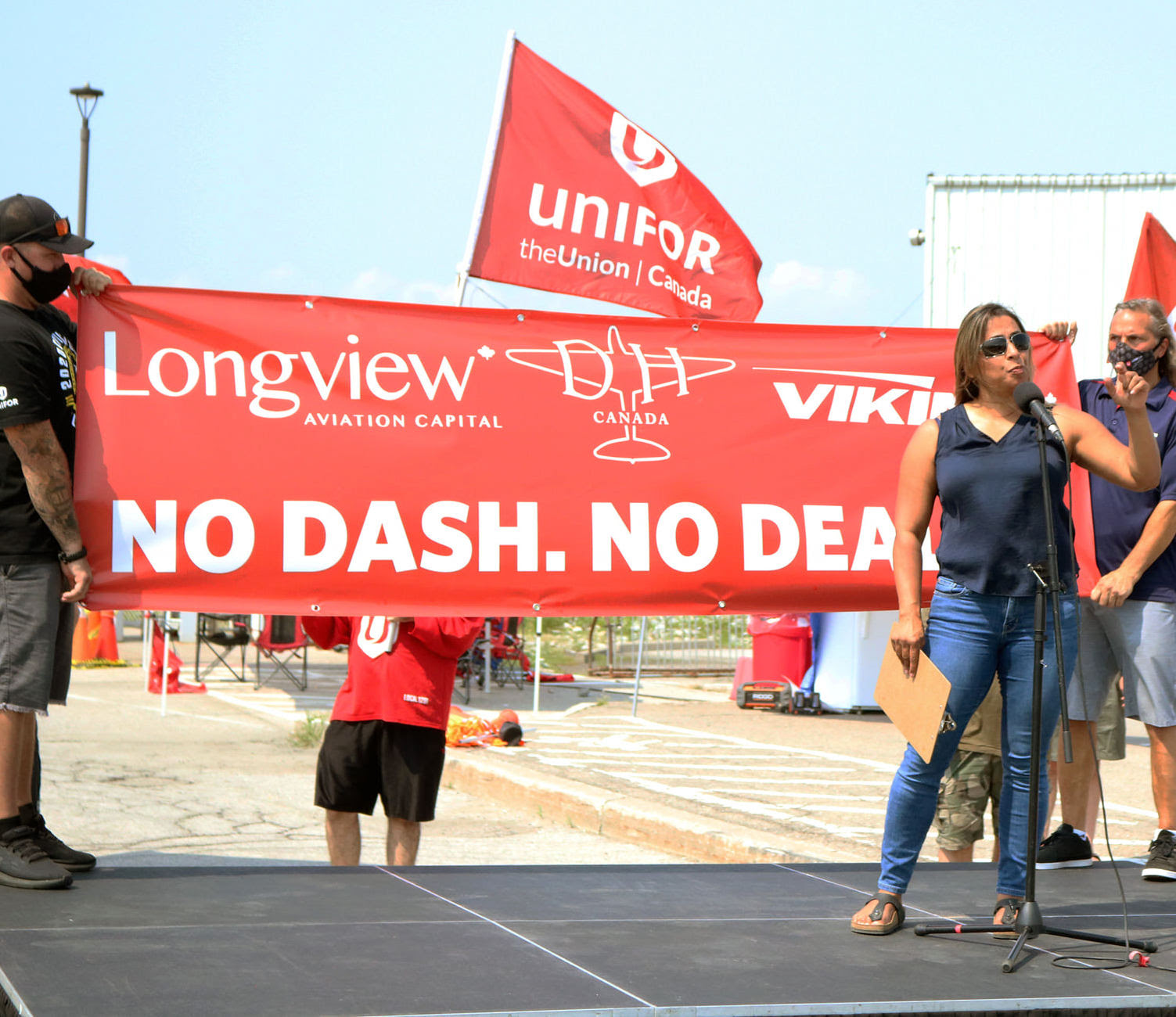 To serve their narrow private interest to become richer, a cartel of oligarchs including the richest family in Canada, along with the owners of Bombardier, the governments of Canada and Ontario and the Ontario Supreme Court are planning to wreck the future and security of the De Havilland workers and the economy of the GTA.

Bombardier split off De Havilland from its operations in 2018 and sold it to Longview Aviation Capital, a gang of international investors led by Sherry Brydson, granddaughter of deceased newspaper magnate Roy Thomson and cousin of David Thomson, who controls the largest family fortune in Canada.

Brydson then declared that the purchase of the De Havilland assets relieved Longview of all obligations to workers under an arrangement between Bombardier and the Canadian government guaranteeing that production of the Dash 8 would remain in the GTA.

The oligarchs stand to make a fortune redeveloping the Downsview industrial land as a mixed residential/commercial area. Bombardier sold a large chunk of the land to developers in 2018, throwing all work in the industrial park into doubt and insecurity. Downsview is surrounded by three subway stops and a cluster of retailers to the south. “If you took that land and zoned it as a residential space tomorrow, condos would be built in a year and the owners would get an amazingly quick return,” said Laura Taylor, a professor at York University’s Faculty of Environmental Studies.

Bombardier selling off De Havilland production to Longview has increased the uncertainty for the future of aerospace work in the industrial park and even relocation of the plant and work to produce the Dash 8 within the GTA. This is occurring despite the aerospace oligarchs’ receiving billions of dollars in public money amidst their assurances and solemn promises that paying the rich would “secure jobs for the foreseeable future.” The latest pay-the-rich scheme came this past July 15 when the federal and Quebec governments paid the rich in the aerospace sector almost $700 million. The oligarchs of Bombardier are themselves notorious recipients of public money. 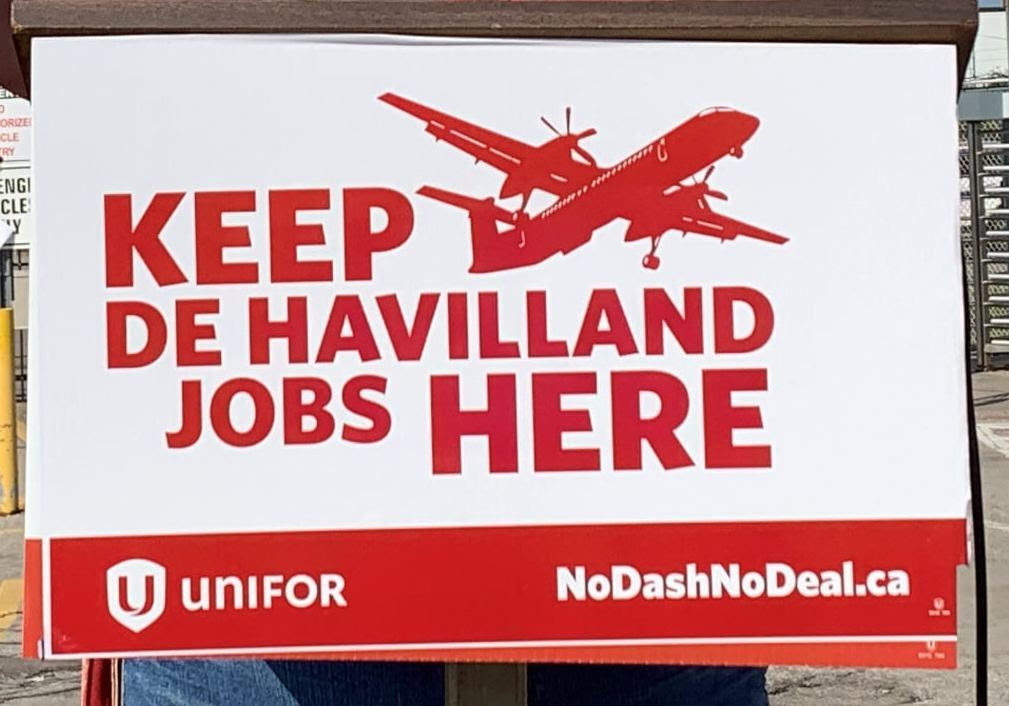 Longview’s attempts to wreck the future of Dash 8 production in Toronto is yet more proof that paying the rich is not only corrupt in itself but that it guarantees nothing for working people. The need for a new direction for the economy under the control of the working people is obvious indeed. A socialized economy owned and controlled as private property is outmoded, dysfunctional and in opposition to the needs, future and rights of the people.

Unifor writes, “De Havilland and its parent company Longview Aviation Capital announced it would no longer build any new Dash 8-400 aircraft at the Downsview plant earlier this year. Longview’s failure to negotiate a future for the Dash 8 program with the union is at the heart of this labour dispute.”

The Longview oligarchs are using their wealth, the obsolete “right” of private property enforced by the state machine in an attempt to crush the modern rights and resistance of the De Havilland workers and impose their will on the economy and people.

De Havilland workers stop vehicles going into the plant on July 27, 2021, the first day
of the strike, prior to the injunction.

The Ontario Supreme Court issued an injunction on August 17 to make the De Havilland workers’ strike ineffective. The injunction permits scabs into the plant to continue production until its final decommissioning without coming to a satisfactory agreement with the workers. Their union condemned the injunction, writing that Ontario Supreme Court Justice Myers, “[sided] with the interests of wealthy corporate owners over those of the community, the 700 workers and their families. This injunction silences our members and stops workers from picketing peacefully against De Havilland. After the company bargained in bad faith, reneged on an agreement to continue negotiations, and began using scabs at the Downsview plant, the union launched a peaceful protest to pressure the company to commit that Dash 8 manufacturing would remain within a reasonable radius of the current Downsview site. […] To call this injunction an abomination is an understatement. This is a new low for workers’ rights in this province. Limiting our members’ picketing activities to just one person walking the line for sixty seconds every five minutes is preposterous.”

The De Havilland workers deserve the support of all unions and workers across the province and country. With the support of the working people and by rousing public opinion against the stomping of workers’ rights, fights such as this one can be won. It can be done! It must be done!

Whose Plant? Our Plant!
Whose Economy? Our Economy!