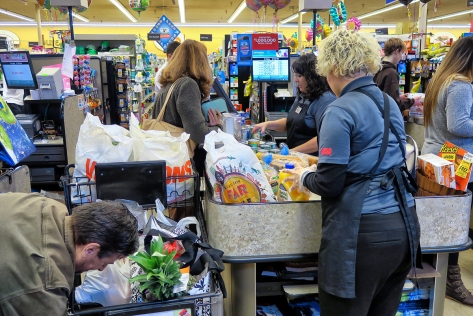 Despite soaring first quarter profit, Canada’s biggest grocery chains ended the wage boost they had been paying front-line workers during the COVID-19 pandemic. Loblaw, Metro and Empire announced that the $2-per-hour premium would end on June 13.

Loblaw president Sarah Davis said stores and distribution centres are experiencing a “new normal” now that COVID-related safeguards have been in place for several months.  The United Food and Commercial Workers union, which represents about 70,000 Loblaw employees, denounced the move in a statement that urged continuation of the pay raise throughout the pandemic, but threatened no job action to defend it.

In the first quarter of 2020, Loblaw Companies Ltd. – which owns the Loblaws grocery stores, No Frills and Shoppers Drug Mart – reported that its first quarter profits soared to $240 million, compared to $198 million in the same quarter last year. In the fiscal second quarter, Metro reported a profit of $176 million, compared with $122 million the year prior.

Front line heroes, indeed all workers, need and deserve a decent living, along with safe working conditions.  A legislated increase in the minimum hourly wage to $20, and nationalization of the giant grocery chains, starting with Loblaw and Metro, would be a good step forward that NDP and labour leaders should now demand.