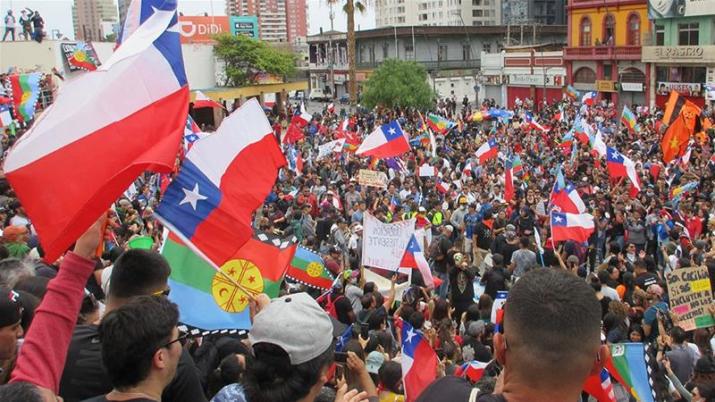 Among the mass protests that erupted in various parts of the globe in 2019, the case of Chile is outstanding.

Chile has long been regarded as a neoliberal success story, a country that had left behind the brutal years of the Pinochet dictatorship and carried out a “democratic transition”, with the return of civilian rule after 1990.

But the fundamentals of Pinochet’s 1980 constitution were left intact. The major political parties, whether of the left or the right, have alternated in power with the tacit agreement that there would be no serious questioning of the economic and social legacy of the Pinochet era, i.e., Chile-style neoliberalism.

Chile’s neoliberal model rests on extreme commodification of social services whether in health care, education or transport, on weak unions, miserable pensions and pillage of the country’s natural wealth by foreign money in league with domestic capital.

There has been growth in Chile over the past 30 years as measured by GDP. But the index of inequality is very high. Wealth is concentrated in the hands of a few rich families, while 50% of Chilean workers earn less than 670 $CDN per month. The cost of living is comparable to Western Europe and North America, but the social wage is much weaker.

The current uprising, although larger and more sustained, rests on diverse experiences of struggle over the past decade that have shaken up Chilean society: successive waves of student protest, a militant feminist movement, the indigenous rights struggle of the Mapuche people, the campaign to de-privatize pensions and resistance to corporate ecocide.

As elsewhere, the rebellion in Chile was ignited by the youth who face the brunt of precarious social conditions in the neoliberal era. The fare hike in Santiago’s metro system was like a match to dry tinder. Young people began jumping over turnstiles and dangling their feet over the subway platform. Public transit ground to a halt.

Only a week earlier, Piñera had described Chile as an oasis of stability. Now, he declared, the country was at war! Declaring a state of emergency, he brought the army into the streets and enforced a curfew, rekindling memories of the dictatorship.

The response on October 25 was a huge mobilization of close to 2 million people in central Santiago. Hundreds of thousands demonstrated in other cities notably Antofagasta and Valparaiso, the next two big urban centres.

The unions were late to respond to this popular uprising. Early calls for a general strike by the Union Portuaria (dockworkers) went unheeded by the CUT (Central Unitaria de Trabajadores) until November when the first of two short lived nation-wide strikes took place.

Piñera Adds a Carrot to the Stick

Faced with a spreading insurgency, and realizing that repression alone would be insufficient to re-establish control, Piñera adopted a conciliatory line. The government launched an “Agreement for Social Peace and a New Constitution”. He withdrew the army from the streets, ended the curfew, reversed the hike in metro fares, bumped up the minimum wage and promised pension and health care reform. Moreover, he invited Chileans to participate in drafting a new constitution pending a plebiscite in April.

In this maneuver, Piñera received backing from some of the parties of the ‘left’, including the Socialist Party, Christian Democrats and the newly minted Frente Amplio (the latter suffering a serious split because of this participation). For its part, the Communist Party kept its distance from Piñera, but without calling for his ouster. It preferred to exert pressure from within a broad unity front, the Unidad Social, in which are grouped the CUT, the No + AFP movement against the current scandalous pension scheme, the March 8 Coordination, and some sections of the environmental movement.

Piñera is responsible for the widespread deployment of police and their arsenal, seeking to wreak maximum havoc among the demonstrators. At least 50 have been killed and close to 4,000 injured by police violence. Among the casualties are over 400 who sustained severe eye trauma from the rubber pellets fired by police. Covering an eye with a hand is a common gesture of solidarity in Chile today, even making its debut on TV game shows. There have been over 3,000 arrests, with reports of torture and sexual violation of those detained. Memorial posters, flowers and photos of the young victims mark the sites where demonstrators have been killed by the cops.

Looking back over the first 4 months of the rebellion, we can say that some of the most important demands of the protest movement have not been taken up by the major forces in the opposition, for example, the demand for the ouster of Piñera or for a general strike. The political initiative has passed at least partially to the government. While the protest is anti-neoliberal, it lacks a clear anti-capitalist program, except for the small forces of the revolutionary left.

Nevertheless, because of the depth of the crisis of the regime, the movement is ongoing, if on a smaller scale. A mass vanguard of several tens of thousands continues to agitate. Hundreds of neighbourhood committees, and in some cases wider coordinating councils still function. There is the ongoing toll of injury and death as demonstrators resist police.

Two million people took to the streets in Santiago on March 8, the largest International Women’s Day mobilization in the world. This augurs well for the resurgence of the mass movement. Ahead lies the struggle for a Constituent Assembly that reflects the popular will, one that is “free, sovereign, joint and plurinational”, as opposed to Piñera’s version that is intended to salvage the regime inherited from the dictatorship.