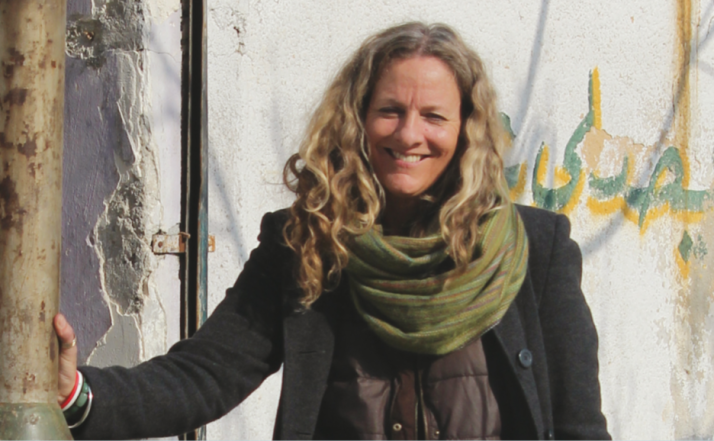 Vanessa Beeley, a British journalist known for her outspoken views on Syria, spoke to a gathering of more than 100 persons in Montreal December 10, 2019.

A meeting planned the day before at University of Montreal was cancelled after a successful campaign by anti-Assad forces to bar her from speaking.

For me, attending Beeley’s talk was a question of principle: to oppose an attempt to shut down debate on an issue that has divided the left.

At the Montreal meeting, Beeley addressed the role of the White Helmets and the claim that Assad used chemical weapons against his own people.

She argued persuasively that the White Helmets are a western organized and financed psy-ops organization that had close associations with the armed Islamic groups during its tenure in Syria. Its humanitarian record has been grossly exaggerated and it was mainly a vehicle for the propaganda campaign against the Syrian regime. The Canadian government is a key promoter of the White Helmets. Through prominent Zionist and former Liberal MP, Irwin Cotler, Ottawa collaborated with Israel to evacuate White Helmet veterans from the war zone and give them privileged asylum in Canada.

Beeley also tracked the unravelling of the heavily promoted claim that Syrian government forces unleashed chemical weapons against civilians. The Organization for the Prevention of Chemical Weapons investigated several incidents that seemed to implicate the Assad regime. Recently, several whistleblowers have charged the OPCW with suppressing evidence and expert opinion. At least one chemical weapons incident may have been staged by rebel forces. Veteran investigative journalists, Seymour Hersh and Robert Fisk, have already cast doubt on the chemical weapons allegations promoted in the west.

I found Beeley’s exposé on the White Helmets and chemical weapons dossiers convincing. Others may not. The conflict in Syria has generated a dense fog of war. It will take several years before reliable histories are written. In the meantime, I counsel caution in accepting at face value western media reportage. I learned to be sceptical during the 2017 siege of East Aleppo. A horrendous massacre was widely predicted in the western media. Destruction and loss of life there certainly was. But not on the massive scale predicted. Instead Syria and Russia orchestrated an orderly surrender and evacuation of the rebel forces.

The war in Syria was a regime change operation sponsored by the US and the NATO powers using their proxies, Saudi Arabia, Turkey and the Gulf State monarchies. The successful resistance of the Assad regime, with assistance from its Russian, Iranian and Hizbollah allies, represents a setback for the U.S.and its NATO partners. From an anti-imperialist perspective, the survival of the Assad regime was the preferred outcome.

On this much, we can agree with Beeley. Her position is weakened, however, by too close an association with the Assad regime. She blurs the line between state propaganda and political analysis. This can be seen in her use of terms like “terrorism” (to describe Assad opponents) and “liberation” referring to areas returned to the authority of government. Terms like “terrorism” and “liberation” are empty signifiers. They arm states to conduct campaigns not only against external aggression but also to justify repression against internal dissent and the rights of ethnic minorities.

Beeley’s position can justifiably be termed “campist”. “Campism” goes beyond the defence of any regime targeted by imperialism. It rules out in advance any criticism of that regime’s foreign or domestic policy. In other words, where imperialism puts a minus, the left should always put a plus. If this requires burnishing the progressive credentials of the targeted regime, so be it.

It is true that many Syrians have experienced the restoration of Syrian government authority as liberation from the brutal rule of the fundamentalist militias. But this is not the same thing as giving Assad a blank cheque.

This is a regime that collaborated with Washington’s war on terror. It introduced neoliberal reforms that impoverished workers and small farmers while enriching the business class and the clique around Assad. It wields a formidable repressive apparatus and political dissidents of various persuasions risk imprisonment.

A settling of accounts with such a regime is the task of the Syrian people and no one else. Western intervention is to be avoided like the plague. And the US sponsored war threatened a regression of truly barbaric proportions.

A victory for Assad was therefore preferable to the alternative. It seems a substantial proportion of the Syrian population agrees. The Syrian people sacrificed much in the fight to preserve their state. But to defend their interests over the long haul they must maintain their political independence from Assad and his cronies at the same time as they oppose western intervention. Beeley does not seem to appreciate this point.

Certainly anti-Assad hysteria is to be avoided. Nevertheless, it is not the role of the solidarity movement to simply echo the propaganda line of the state whose rights we defend against imperialist aggression.

Let’s turn to the anti-Assad left. Here, we have an opposite and much more serious error: that of joining in the demonization of third world autocrats. This provides a cover for the imperialist regime change agenda. It bends to the propaganda campaign of the western media. It adapts to the liberal and social democratic discourse of selective moral condemnation.

Widespread on the left, this point of view reflects the legacy of so-called ‘third campism’. The term ‘third campism’ has its origins in the consolidation of the Stalinist regime in the USSR. For some, the Stalinist bureauracy had become a new exploiting class and the USSR was re-cast as a “state capitalist” regime. It followed that the left should join neither camp but instead remain neutral in any conflict between the USSR and the West.

Contemporary third campists try to convince us that we live in a multipolar imperialist world. According to this view, Russia and China are imperialist powers in their own right. They are rivals to the western powers for world domination. Their role in global affairs must be viewed through the same optic as for western imperialism. The result is a weak engagement in, or outright abstention from, the hard work of building an effective anti-intervention movement in the imperialist heartlands. Instead, regimes targeted for regime change must pass a worthiness test and it is a stroke against them if they seek assistance from Russia or China.

The principles of respect for self-determination and staying the hand of our own imperialists must stand at the centre of anti-war and anti-intervention work. Insisting on a particular characterization of a regime such as Assad’s, whether pro or con, can never serve as a basis of unity for the solidarity and anti-war movement. There will be differing points of view on the character of regimes that the western powers seek to isolate and replace. But as internationalists we ought to defend the national sovereignty of weaker states when they are threatened by the most powerful states in the global capitalist order.

Our principal task is to oppose imperialist aggression, whether it takes the form of bombing and occupation, proxy wars or the levying of punitive sanctions, as well as to counter the lies and distortions of the western media. Viewed from this perspective, the Assad regime had every right to call for assistance from its allies.

Whatever the differences on Syria, the attempt by some in the anti-Assad camp to deny a platform to Beeley must be vigorously opposed. This is a sectarian attempt to deny a basic democratic right and obstruct debate on the left.

The anti-Assad left insists that what we have in Syria is a popular revolutionary uprising. This is wishful thinking. It is true that for a brief moment in 2011, Syria looked set to have its own version of the Arab Spring as protests broke out over long pent up economic and political grievances . But the insurgency was quickly militarized and hegemonised by reactionary Islamic forces sponsored Saudi Arabia and the Gulf State monarchies and selectively armed and funded by the CIA and the Pentagon. Throughout the long war, the social base of the Assad regime and the loyalty of the army was never seriously in doubt.

Thus far, the proxy war to displace Assad has failed. This represents a setback for the US and the other NATO powers, including Canada. It is also a defeat for the reactionary Middle Eastern regimes that are key to imperialist control of the region. Syria has not become a second Libya. As a result, some of the historic acquisitions of the Syrian people may be preserved. That includes a national system of health and education as well as a tradition of religious and cultural tolerance. This in turn favours the construction of a revolutionary socialist pole in Syrian politics.

Manipulation of public opinion by western intelligence and the media should be exposed. Beeley with others have taken up this task with diligence. But exposing hidden agendas and conspiracies can narrow the field of vison and divert attention from more substantive issues. US forces still control a large slice of northeastern Syria and Turkey has invaded across the country’s northern and north western frontiers to further its war against the Kurds. Along with Venezuela and Iran, Syria is subject to crippling sanctions amounting to an embargo, with drastic consequences for living standards and reconstruction. The scandal of the White Helmets or the dubious chemical weapons accusations do not compare in scope and consequence to these manifestations of brute imperial force.

In sum, there was much in Beeley’s talk with which I can agree. In my view, however, her overall framework was constrained.

I would have liked to hear her elaborate on other questions, among them:

-Given the massive casualty rate in the Syrian army, what role will surviving veterans and bereaved families play in Syrian politics in the upcoming period?

-What way forward is there for the Kurdish minority to defend its right to self-determination and autonomy in the current situation?

-Now that the war may be approaching its denouement, how can the anti- intervention movement in the west most effectively oppose the brutal sanctions imposed on Syria and the ongoing violations of its national sovereignty?