On August 17, between 4 and 7 p.m., a protest was held in Vancouver in solidarity with those in Hong Kong fighting against their corrupt government. At the corner of West Broadway and Cambie Street, protesters and counter-protesters rallied in front of the entrance to the Broadway–City Hall subway station. This is a site of great importance to the Vancouver Chinese community, steps from City Hall and a gateway to the heart of Downtown and Richmond, a predominantly Chinese area of the city.

The protesters gathered there to raise awareness of both the 3-month-long struggle of the people of Hong Kong against the repression they have faced since June of this year and for their demands. They ask that: Hong Kong government withdraw the extradition law; that it stop referring to protesters as rioters; that it unconditionally free those who have been arrested; that it hold free and open elections; and that it establish an independent inquiry to investigate allegations of police brutality.

Those protesting in support of those in Hong Kong were of various ages, adorned in black and holding signs that read “Free Hong Kong” and “I can’t keep calm because I am from Hong Kong.” Many wore gauze over their right eye in an effort to draw attention to the medic whose eye was ruptured and eye socket broken when Hong Kong police shot her with a projectile. Numbering as many as 300, they were met by a group of counter-protesters of approximately equal size. These counter-protesters were all students dressed in red holding both Canadian and Chinese flags, and signs that read “Love China, Love Hong Kong.” For two hours protesters and counter-protesters, who were all predominately of Chinese descent, exchanged chants, and at times the black-clad protesters sang the Canadian national anthem while the red-clad pro–Chinese government counter-protesters sang the Chinese national anthem.

At 6 p.m., when the number of counter-protesters dwindled down to a handful, a current of political contradiction became apparent. It started when those in solidarity with the people of Hong Kong began to chant “Go Back to China” and “This is Canada” at the counter-demonstrators, two chants with racist connotations that could well have been hurled at the ancestors of the protesters, chants that make Chinese immigrants feel unwelcome in Canada. Further contradictions appeared as many counter-protesters driving luxury cars brandishing Chinese flags slowly cruised by the protesters on Broadway. Each vehicle that passed prompted loud chants from the protesters. The police would then immediately approach the vehicle and demand to see driver identification, resulting in chants of “Thank You, Police” from the protesters, praising the cops for an obvious overreach of authority, which resulted in at least one vehicle being pulled over.

Speaking to several participants, I came to see that many believe that the brutality of the Hong Kong police is a result of the particular nature of the Chinese government, and that the violence would cease if China only had a democratic government. Those with a historical and revolutionary memory know however that this treatment harkens back to the mistreatment of people during the Winnipeg General Strike, which centenary was recently commemorated, and is identical to the treatment of our yellow vest comrades in France right now. Furthermore, the use of thugs to harass and beat protesters while police ignored it recalls the blind eye of the cops across the U.S. to the acts of the Pinkerton security goons in the labour clashes that shaped the US political system in the early twentieth century.

The demand to end the pre-selection of candidates for the Hong Kong government is a demand supported by Socialist Action.  Ironically, Beijing’s policy is just a more blatant form of the practice that prevails within Western so-called democracies, where the overwhelming majority of political candidates have to conform to establishment norms before they are ever allowed to be presented by mainstream parties to the electorate. Even in those cases where a candidate slips through the cracks, such as in the cases of Bernie Sanders and Alexandria Ocasio-Cortez, what we see is merely the right-wing of the socialist movement subordinating itself to a major party of the capitalist class — a form of class treachery that is doomed to co-optation and failure.

If the contradictions within the solidarity movement in Canada are indicative of contradictions within the Hong Kong protests, it is clear that the corrupt nature of the Hong Kong government will not change even if all the demands of the protesters are met. The methods of oppression and control remain consistent across all kinds of capitalist governments, no matter the ideological garb in which they drape themselves, whether the faux “Communism” of the authoritarian capitalist Chinese state or the ostensible liberalism of Hong Kong, a bastion of global financial capitalism. 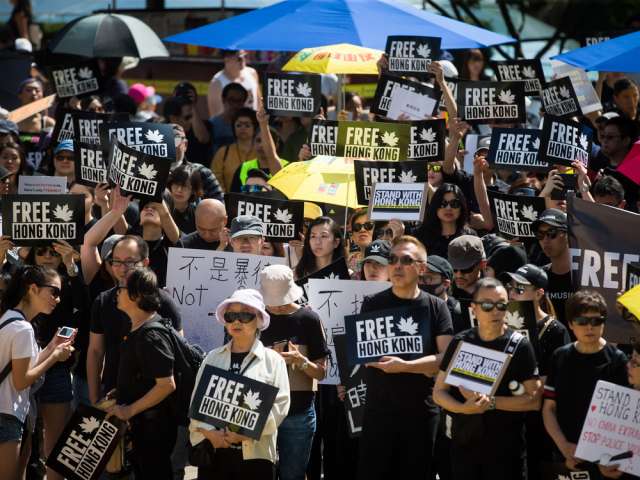 Despite the two sides being led by capitalist forces, Socialist Action stands with the millions of workers who want democratic self-government, which is an essential step towards socialism in Hong Kong and China as a whole.  At the same time, the only solution to the problems raised by the Hong Kong protesters is a socialist revolution initiated from the bottom up. It is only when the masses of working people gain full democratic control of the means of production and the levers of political power that exploitation and oppression will become a thing of the past.