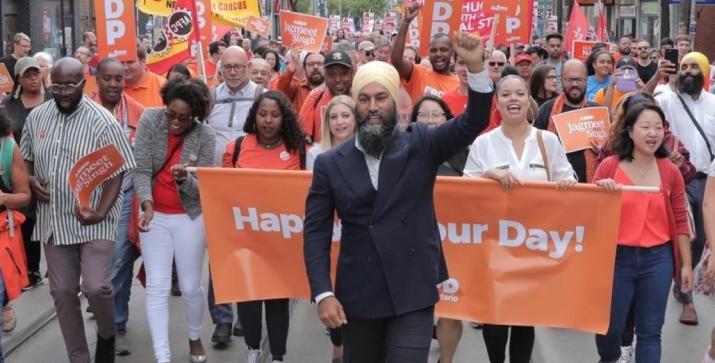 On October 21 Canadians will elect 338 Members of Parliament.

Since its high point — winning 103 seats in 2011, making it the Official Opposition, which occurred when a Conservative government was elected under Stephen Harper — the fortunes of the New Democratic Party have been in decline. In 2015, with polls indicating a possible NDP federal government, the right wing social democratic leadership moved to the right. The party ran on a promise of a neo-liberal balanced budget. The capitalist Liberal Party under Justin Trudeau promised more funds for health and education, admitting it would increase the deficit. They won. The NDP lost 60 seats, reduced to 43.

NDP leader Thomas Mulcair was forced to resign at a party convention owing to the organizing efforts of the Socialist Caucus and other forces. Jagmeet Singh, former deputy leader of the Ontario NDP, and a civil rights lawyer, was elected federal leader. Under Singh’s unsteady, right wing social democratic direction, party support has sagged to between 10 and 14 per cent of the electorate. Donations shrank. Party staff was cut.

In desperation, Singh shifted to the left, calling for concrete steps to tax the rich, including a tax on the assets of those with a net worth in excess of $20 million, closure of massive loopholes benefitting the rich, extended Medicare, and a form of Green New Deal with strong roles for labour and indigenous people.

With the two major capitalist parties, the Liberals and Conservatives (similar to the Democrats and Republicans in the U.S.) running neck and neck in the current election campaign, and the NDP lagging far behind, the Liberals are calling for ‘strategic voting’ to defeat the even more right wing Tories.

Both Liberals and Tories are staunch supporters of imperialist aggression in Venezuela, against Syria, and in support of NATO and the apartheid Zionist regime in Israel.  The Tories are more openly racist on immigration; they include candidates who oppose abortion rights and gay marriage equality.

In this election the house of labour is deeply divided on political action. Part of the union leadership supports the Liberal Party call for ‘strategic voting’ to defeat the Tories.  Jerry Dias, President of Unifor, Canada’s largest private sector union with 305,000 members, urges a vote by workers for the candidate most likely to defeat the Tories. At the recent Unifor convention in Quebec City, both Prime Minister Trudeau, who broke the Canadian Union of Postal Workers’ strike with back to work legislation in 2018, and Chrystia Freeland, Minister of External Affairs and a principal ally of the Trump imperialist regime, spoke to the delegates. No one was invited from the union-based party, the NDP.

Dias led Unifor out of the Canadian Labour Congress when the CLC opposed his union raiding practices, thereby splitting the labour movement.  Unifor has so far utterly failed to save the jobs of thousands of auto workers doomed when GM decided to close the massive Oshawa auto works.  Dias indulges in crass nationalism when he calls on workers to boycott cars built in Mexico, rather than demand nationalization of GM Oshawa.  Similarly, Unifor urges workers to cross the class line and vote for Liberals instead of the NDP.

Hassan Yussuff, President of the Canadian Labour Congress,     says that voters “must elect a government that is committed to a fair Canada for everyone.” In the same statement he rails, appropriately, against Conservative provincial governments and the Conservative Party federally. But he does not criticize the Liberals and he does not endorse the union-based NDP.

Dias and Yussuff are leading an ignominious retreat of the Canadian working class, back into the arms of the capitalist parties and away from hard won independent working class  political action in the form of a union-based, working class party, the NDP, the only such big party in North America.  Unable and unwilling to lead mass struggles against 40 years of austerity and job losses, disillusioned with the sad performance of the right wing NDP leadership, but again, not in disagreement with their reformist, pro capitalist program, these “leaders” are acting as agents of the capitalist class in the labour movement.

But there are powerful unions opposing them and supporting the NDP.

The 225,000-member United Steel Workers commissioned radio ads that proclaim, “Why would we choose Justin Trudeau when he doesn’t choose us. There’s only one party that puts working-class people first — Jagmeet Singh and the NDP,”.

On their web site the Steel Workers urge members to join and campaign for the NDP. The union is directly affiliated and sends delegates to the NDP conventions, as do many other unions. It states, “Jagmeet Singh and the NDP have a bold vision that puts people first – A New Deal for People. With the help of Steelworkers talking politics and volunteering, we can win a strong voice in Parliament that’s On Our Side.”
– Ken Neumann, USW National Director

The Canadian Union of Public Employees (CUPE) is the largest union in Canada, representing 650,000 workers, of which 60% are women and about 30% are part time, including many in precarious jobs.  Its website states:

“CUPE is a founding partner of the NDP. We are proud to be New Democrats.

Working closely with our party has given CUPE members from coast to coast to coast a strong voice in Canadian politics. Together, CUPE and the NDP can achieve positive change for our members and all Canadians.

CUPE encourages all members to join and be active in the NDP. As a member, you can participate in riding associations, help shape NDP policy, and run for office as a New Democrat.”

On the issue of climate change, CUPE advances the slogan “No Jobs on a Dead Planet.”

The leaders of the United Steelworkers Union and CUPE are not socialists. They are privileged bureaucrats who come no where near to maximizing the power and impact of their unions by educating and mobilizing their members in mass action on economic and political issues. But they understand the class line in politics. They know, whatever the issues, problems, or circumstances, you do not support the capitalist parties – not ever. Dias and Yussuf either do not understand this elementary principle, the principle of independent working class political action, or as pro-capitalist labour bureaucrats they just don’t care.