On July 26, 1953, a group of courageous young men and women — led by Fidel Castro — attacked the Moncada Barracks in the city of Santiago de Cuba, and the Carlos Manuel de Cespedes Barracks in Bayamo, in an attempt to overthrow the U.S. supported puppet dictator Fulgencio Batista. As the island’s second largest military garrison, the Moncada Barracks was critical to Batista’s military control of southern Cuba. The goal was to seize the weapons and distribute them to the people and spark a national uprising that would not only overthrow the Batista dictatorship but also establish Cuba’s independence and sovereignty. This heroic act is annually commemorated all over Cuba as the beginning of the movement and struggle that laid the foundation of the Cuban Revolution.
This year’s commemorations are imbued with a particular poignancy;  it is the first without the physical presence of the historic leader of the Cuban Revolution, Fidel Castro. Fidel epitomized the unbending commitment to Justice, Dignity and Independence that has characterized Cuba since the triumph of the Cuban Revolution.  Fidel’s living legacy continues in the work of the Cuban Revolution. Fidel’s example and fidelity to principle continue to inspire the Cuban people, who continue on the path of independence, self-determination and human dignity.
The attacks were carried out by an organization that was created in 1952, under the leadership of Fidel Castro and Abel Santamaria, and comprised of young workers, students, artisans, peasants and landless farmers. It had around 1,500 members and affiliated itself with historic Cuban national liberation figures such as José Martí and Antonio Maceo. Around 120 youths were part of the attacks, approximately 70 of whom were killed, with many being tortured and executed after the attack. The survivors, including Fidel Castro, were subsequently put on trial and given lengthy prison sentences. Most, including Fidel Castro, were released after an amnesty in May 1955. This amnesty was the result of the mass mobilization of Cubans in support of the imprisoned rebels. Under the leadership of Fidel Castro, the July 26th Movement galvanized Cubans, ultimately leading to the victory of the Cuban Revolution on January 1, 1959. 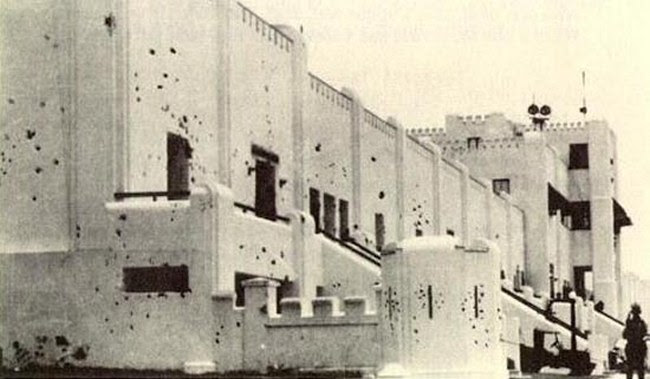 The Moncada Barracks shortly after the July 26, 1953 attack. The barracks have been converted into a school
and Museum of the Revolution where the bullet holes shown here can be seen to this day.
While the Moncada attack failed in fulfilling its immediate objective, it was central to the Cuban people’s struggle for national affirmation and social emancipation. Cubans have always placed Moncada in a broad historical context, viewing it as a crucial link in the century-long striving of Cuba to free itself from Spanish colonial domination and U.S. tutelage, and then, establish authentic independence. At his trial Fidel Castro delivered a speech that eventually became the manifesto of the movement to overthrow the Batista tyranny. It was published as La Historia Me Absolvera (History Will Absolve Me) and laid out the national and social goals of the revolutionary movement that eventually triumphed on January 1, 1959. Today, the Moncada and Carlos Manuel de Cespedes barracks, now a school and a museum, stand as concrete symbols of that successful struggle.
Canadian commemorations of Moncada Day are a reflection of the ties that exist between Cuba and Canada. Canadians admire the courageous and rebellious spirit embodied in Moncada; a spirit that today is so powerfully manifested in Cuba’s steadfastness against the efforts of the empire to destroy the island’s independence. Canadians irrespective of their political or ideological positions, stand in favour of building relations with Cuba based on mutual respect and equality, relations which uphold Cuba’s right to self-determination and sovereignty. Having traveled to Cuba in the hundreds of thousands and having witnessed Cuban reality for themselves, Canadians have come away with a profound respect and admiration for the Cuban people and their efforts to build and defend a society centred on independence, justice and human dignity. 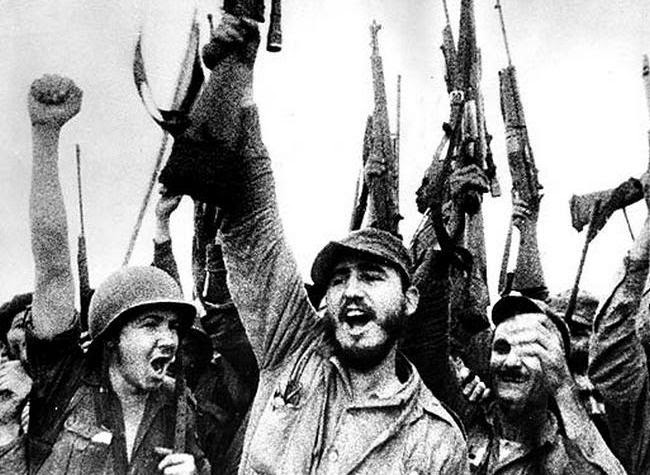 Raúl and Fidel in the Sierra Maestra during the Cuban Revolutionary War
Since the Cuban people embarked on the road paved by Moncada, Cuba has refuted and continues to refute the colonialist mentality and practice of foisting on independent countries imperial arrangements and dictates that they resoundingly reject. The Cuban Revolution has refused to renounce its right to self-determination and the principles, principles forged in the crucible of Moncada. In the years that have flashed by since Moncada, the Cuban people have shown what is possible to achieve when one defends genuine independence and self-determination. The example of Cuba assumes even greater significance as the 21st century unfolds, fraught with grave dangers that threaten the well being of the peoples of the world. In the midst of these profound challenges, Cuba refutes those who argue that relations among the world’s nations and peoples are — and can only be — determined by self-interest, the pursuit of power and wealth. As Cuba continues on the path of social justice, human dignity and international solidarity, the Cuban Revolution continues to be an inspiration to humanity. Cuba demonstrates that it is possible to build relations based on genuine solidarity and social love; it is a living example of the alternatives that permit people to realize their deepest aspirations, and that another better world is possible.  History has given its judgment, vindicating the attack on the Moncada Barracks!