Skip to content
by Tyler Mackinnon and Ben Rostoker 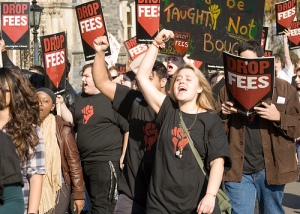 With the Quebec student strikes still fresh in mind, one would expect a push for solidarity in student unions to fight austerity measures and tuition hikes. Sadly, the opposite seems to be the case. Before the fall semester, students from 15 different universities across the Canadian state campaigned to get their local student unions to leave the Canadian Federation of Students.
The CFS was formed in 1981. It has been a critical tool for organizing cross-country activities to protest rising fees. Originally the CFS was identified with grass roots actions and advanced working class demands for the abolition of tuition fees. However by the mid-1990’s what was once a meeting place for progressive student activists had turned into a vehicle for careerist liberals. Many of these careerists sought to downplay radical demands and weaken the CFS as a forum for student union organizing. Under an increasingly opportunist leadership, the CFS became riddled with corruption, including such practices as ballot box stuffing. CFS activism shrivelled.
This altered somewhat in the spring of 2012, when tens of thousands of Quebecois students hit the streets against the tuition increases imposed by the Jean Charest Quebec Liberal government. The CFS rose from hibernation and supported the Quebec students; it even dusted off its old demands for free-post secondary education. As the Quebec student strikes evolved into a general movement against austerity, the CFS claimed it sought to reform its own top-down style of conventions comprised of delegates, and replace it with the Quebecois system of general assemblies that encouraged all students to participate.
Sadly the promises of the CFS leadership never materialized.It has been over a year and not a single student protest has been organized by the CFS. There has been no move to adopt Quebec’s more democratic institutions. Indeed, the idea of a Quebec-like student strike spreading to English Canada has been condemned by the CFS, which claims it would be divisive, since the student body is “not ready yet.” This is where we see some of the basis for the split emerging.
Despite the threats voiced by various spokespersons for the students seeking to disaffiliate from the CFS, it seems unlikely that the 6,000 to 8,000 signatures needed at Ryerson University to cause a referendum on this issue will be gathered.
Ryerson Student Union President Melissa Palermo expressed surprise that students would even consider such a move. “We have had such widespread support across Ryerson for what we are doing with the CFS,” Palermo told SA. She said that despite the many flaws of the CFS, it still provides post-secondary students with a variety of services, such as the community food rooms. Right-wing students tried to push disaffiliation in 2009, and the RSU is confident it will fail again.
However, the last split effort does pose key questions: Why and How can this be done? It seems clear that those who support the split want to form a new student union, but they seem to have no plan to accomplish it. There is no broad, grass roots organization working to unite those who want to create a new union. Part of the problem is the political makeup of the split campaign. At its heart is an anarchist-inspired ‘apolitical’ movement of right wingers, anti-unionists, anarchists, new left socialists, and others who claim that this is a movement that everyone, both ‘right and left’, have their reasons to support. Thus we have right wingers saying that they never wanted to be in a union, and leftists denouncing the lack of concrete CFS solidarity with Quebec students. So the guiding light seems to be ‘let’s break the CFS and let its members spill out into the ether.’
The prevalence of anarchist misconceptions on organizing without leadership, and so called ‘diversity of tactics’ (which all too often means no planning and condoning the actions of a substitutionist, violent minority) means that there is no plan to replace the CFS with a superior structure. Plus, there is no attempt to build a movement inside the CFS to address the corruption, unaccountability, and lack of internal democracy – even as part of a plan to build a better and separate union. And with no visible organization, or coordination, those wishing to leave the CFS will either be left to their own devices, and substantially weaker. Less effective equivalents to the CFS could emerge, or a disjointed and isolationist political landscape for student unions may result.
The CFS is a union and it should be treated accordingly. There should be an organized fight within it. Only as a last ditch effort, and provided that there is a mass base for real change, and only if the route to internal democratic change is totally barred, should a split be contemplated.
Youth for Socialist Action argues that there should be a fight within the CFS to push its leadership to the left, or to replace it and return the CFS to its democratic roots as a bottom up organization. In addition, the local student unions should encourage its members to get involved in campaigns for social justice, such as the ‘drop tuition fees’ and ‘abolish student debt’ campaigns, the Justice for Sammy movement, opposition to war spending and social cuts, and the fight for affordable housing and free mass public transit. Youth for     Socialist Action contends that it is vital to show the connection between the attack on the students’ movement and the corporate austerity drive. To fight inside, as well as outside the CFS, is the only way the students’ movement can hope to win against the capitalist rulers and their anti-student, anti-worker agenda.