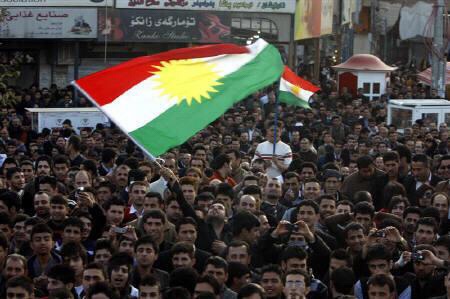 Socialist Action stands firmly in solidarity with Kurdistan workers who are demonstrating en masse for payment of long-delayed wages, for freedom of political prisoners, for an end to vicious repression, and for dissolution of the corrupt Kurdistan Regional Government.

In recent days, tens of thousands of people in Sulaimaniyah and Halabja provinces of the Kurdistan Region of Iraq filled the streets to demand the dissolution of the Kurdistan Regional Government (KRG) due to 26 years reckless, corrupt, and authoritarian practices. KRG security forces responded to the protests by arresting demonstrators and journalists, seizing TV stations, including the independently-owned NRT, and firing into the crowds of unarmed protestors with heavy weapons supplied to KRG forces by the Global Coalition Against Daesh.  The Canadian state is a participant in the GCAD.  The number of reported deaths has reached 20, and injuries at least 70.  Those numbers will rise as the massacre of demonstrators continues. The use of violence against innocent civilians is a grave violation of human rights.  It is incumbent on Ottawa and its Coalition partners in Iraq to take immediate action to prevent additional injuries and deaths. The dominant parties in the KRG, the Kurdistan Democratic Party (KDP) and Patriotic Union of Kurdistan (PUK), have ruled the Kurdistan Region as a private fiefdom for 26 years. Since 2003, the United States has supplied the militias commanded by these two parties with weapons, training, and financial support. The Canadian Ministry of Defense and the Liberal government looked the other way as partisan militias shuttered the Region’s democratic institutions and party elites enriched themselves — while failing to provide citizens with basic services like water and electricity. The KDP and the PUK squandered the Region’s budget through their corruption and mismanagement, and failed to pay the salaries of 1.4 million public service workers and retirees –over 75% of the KRG’s population– causing deep and widespread poverty. Journalists and activists who expressed dissatisfaction with the reckless abuses of power, were harassed, kidnapped, tortured, and killed. The ruling parties relied on external support to sustain their “legitimacy”.

As a result, Canada is directly responsible for the corruption, the private accumulation of power, wealth, and weapons which they now use against their own people.

We call on the Government of Canada to demand that the KDP and PUK:

We urge the organizations of the working class across the Canadian state to demonstrate solidarity with the mass protests and just demands of our sisters and brothers in Kurdistan.

ISIS (the Islamic State of Iraq and Syria, or ISIL, the Islamic State of Iraq and the Levant) launched “the siege of Kobani” on 16 September 2014. It’s aim was to capture Kobani, a Syrian town which has been under Kurdish control since July 2012. By 6 October, ISIS fighters had fought their way into the centre of the town. This shocked those who see the de facto government in Rojova (Syrian Kurdistan just south of the Turkish border) as a democratic alternative for the region. Rojova’s foes, including the government of Turkey led by Ahmet Davudoğlu, celebrated what it saw as Kobani’s impending fall.
But Kobani did not fall. Kurdish militants vigorously defended Kobani. Under growing public pressure, the United States had to reverse its policy and provide military and humanitarian aid to the residents of this key town. By mid-October, the US-led air strikes were destroying ISIS tanks and artillery. Washington pressured Turkey, its longtime NATO ally, to let the peshmerga of Iraqi Kurdistan enter Kobani via Turkey and help the Democratic Union Party (PYD), the Syrian Kurdish affiliate of the PKK (Kurdistan Workers’ Party), which has fought an armed struggle against the Turkish state since 1984. Currently, there are many reasons to hope for an ISIS defeat. Tens of thousands of Kurds have demonstrated in the streets in southeast Turkey to support Kobani.

In fact, Ankara seems to prefer that ISIS succeed in taking Kobani in order to weaken the Kurdish national liberation struggle. While the Turkish government did not allow Kurdish militants and volunteers to enter Kobani via Turkey, it let ISIS militants freely enter and exit across its borders. There have been reports of intelligence collaboration between Turkey and ISIS. The main reason for this is Turkey’s desperate attempt to smash the Kurdish movement. The Syrian Kurds established an autonomous government in three cantons in Rojova. While this progressive development was not a revolution, as some progressives have characterized it, nonetheless it embodied the democratic aspirations of the Arab revolutions. It began as an entity autonomous from US imperialism—unlike the regime of Iraqi Kurdistan led by Masoud Barzani, who is a staunch supporter of U.S. Imperialism. This was also a great step forward for the long lasting Kurdish national liberation struggle in Turkey since PYD is identified with the PKK and its imprisoned leader Abdullah Öcalan.
The Turkish government’s pro-ISIS policies, which seemed to be aiding a possible massacre in Kobani, sparked widespread Kurdish riots across Turkey. Forty-four were killed in clashes with the Turkish police and with the Hüda Par, a racist organization with links to the Turkish government. Many thought this was the end of the so-called “Solution Process”, the secret peace negotiations between Ankara and PKK’s imprisoned leader Öcalan.
The dizzying pace of events in this troubled region can be objectively analyzed only with proper theoretical and historical tools. Revolutionary Marxism provides these tools, and proposes the following course of action:
1) The Kurdish national liberation struggle should be defended. Kurds have a right to national self-determination. Defeat the siege of Kobani! Defend the autonomy of the government in Rojova!
At the same time, our Kurdish sisters and brothers should know that cooperation with the U.S. or its allies has never, and will never benefit their struggle for emancipation. For similar reasons, they should not ally with the North Iraqi regime of Barzani, who is loyal to American interests in the region. Barzani’s attempts to contain the Syrian Kurds should be stopped.
2) The Turkish government is corrupt, treacherous and undemocratic, and should be overthrown by the working class. The so-called ‘Solution Process’ is a lie. Permanent peace between the Kurds and the Turks can be achieved only by the joint struggle of the Turkish and Kurdish working people. The Gezi Revolt and the Kurdish national liberation struggle should be linked.
3) Imperialism out of the Middle East.  Canada Out of NATO.  Stop the bombing of Iraq and Syria by Washington, Ottawa, London, Paris and the latest U.S.-led ‘coalition of the willing’. –By Y. Fikret Kayali