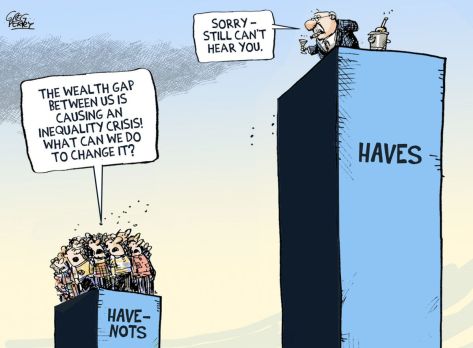 Did anyone benefit from the COVID-19 pandemic?  Billionaires did.

Tobias Lutke is the 40-year old CEO of Ottawa-based e-commerce company Shopify Inc.  He saw his personal wealth rise from $3 billion (U.S.) in March 2020 – to $8.5 billion in August.

Generally, e-commerce flourished during the pandemic as fewer people visited stores.  The poor got poorer, already hurting from the great recession that started prior to the pandemic.  Meanwhile, the rich got richer.

Jeff Bezos, the world’s richest man and CEO of Amazon, has a net worth of $189.4 billion. According to Bloomberg News, Bezos’ fortune has grown by $74 billion since the start of the year.  In just one day in July it jumped $13 billion.

The Walton family, who owns the Walmart empire, gained an extra $25 billion over the past year – the same amount Facebook’s CEO, Mark Zukerberg, saw his wealth climb.  According to Americans for Tax Fairness, the fortunes of U.S. billionaires soared by $434 billion during the pandemic lockdown between mid-March and mid-May.

Canada’s billionaire class is doing well too, thank you very much. The Thomsons, Canada’s richest family who oversee the Tomson Reuters media empire, saw its wealth leap from $31.6 billion in April to $37.7 billion in mid-August.  The Westons, who control the Loblaws supermarket chain, went from $7 billion in April to $8.4 billion today.

An Ipsos survey conducted in April showed that 40 per cent of Canadians under the age of 55 had only one week’s worth or less of savings to cover costs like food or rent if they lost their jobs due to the pandemic. In the U.S., almost 40 million jobs were lost by the end of May. And 40 million Americans could be evicted from their homes by the end of this year if state authorities don’t help.

In Canada, the top one per cent of families hold about 25.6 per cent of the wealth – roughly $3 trillion CDN.

Companies that are prospering are less dependent on large labour forces and are heavily invested in the online world where people work from home. That is one reason why Facebook, Amazon, Apple, Netflix and Google – the so-called FAANGS – are seeing revenue climb and increasingly dominate the stock market.

If most of the money is hoarded by a small group of people, the capacity of workers to buy goods and services shrinks.  Steep wealth taxes would put a band aid on this festering sore. Only radical surgery will rid the world of the underlying disease.