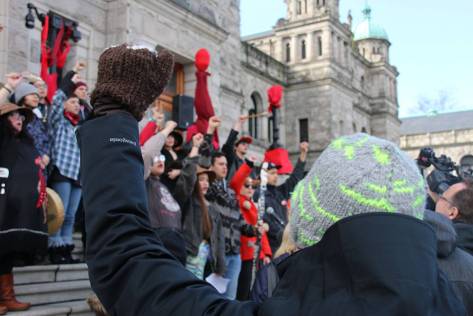 More unexpected was the huge turnout of young whites and others in solidary with the oppressed indigenous peoples. Together they blocked highways, closed bridges, occupied key railroad arteries, shut ports, choked ferry access, blocked the BC legislature and more. These actions continued for over 2 weeks. It was the largest outpouring of solidarity with the indigenous people against their capitalist oppressors in Canadian history.

Although John Horgan, the NDP Premier of BC, a social democrat, was inclined simply to enforce “the rule of law” and attack the indigenous people and their allies, Trudeau proposed negotiation.  After two weeks with no progress, Trudeau too ran out of patience.  The police began arresting activists, young and not so young.

The last of the protests, the 17-day 24-hour blockade of the BC legislature was ended by a dirty trick by the NDP attorney general. He invited 5 key leaders inside to discuss the removal of the blockade. They went, but when no agreement was reached, they were arrested, as had been previously arranged with Parliamentary security service.

As all of this unfolded, negotiation with the Wet’suwet’en continued in the north. The Federal and BC governments, in the end, accepted the contention of the Wet’suwet’en hereditary chiefs, that they alone, and not the Band councils set up under the Indian Act of 1876, have final authority over their unceded land.  The Supreme Court of Canada had already agreed with this view in a prior decision, but finally the two governments accepted it, at least for the future. A major victory.

No agreement was reached on the pipeline, and even though the rightful title holders had never agreed, the contractor started up work and the RCMP added new forces on the unceded land, both being clear provocations. The fight subsided in the context if the current COVID 19 pandemic, but the Wet’suwet’en stated they are not standing down and not asking their allies to step down. The struggle continues.

Socialist Action has been expecting and preparing for such struggles. SA recently published an in-depth booklet on the history and struggle against colonial-settler oppression, occupation, theft and murder of indigenous people in the Canadian state. It explains how our common struggle against capitalism is inextricably bound up in theirs, and vice-versa. There can be no reconciliation under capitalism, and there can be no socialism without reconciliation.

Socialist Action also published a new booklet on the life and death struggle against climate change, how eco-catastrophe originated in the ceaseless drive of capitalism for capital accumulation through profit. The very survival of capitalism depends on it and drives the rapid expansion of green house gases that may kill us all. Again, socialism, a system of rational and democratic operation of a planned economy, is the only way out of the present crisis.

The new generation of indigenous people, and many young descendants of the colonial settlers, are fighting side-by-side for climate sanity and indigenous rights. Many are beginning to understand the capitalist system is at the heart of the problem, resisting any solution. Many are beginning to look to socialism as the way out. Belatedly, some large labour organizations are expressing solidarity. Even the Ontario New Democratic Party issued a statement of support for the Wet’suwet’en.

But the BC NDP government of John Horgan has boldly stepped forward as the prime defender of the global oil cartel and their methane operations in BC.

Horgan and his Cabinet are teaching painful lessons about the social democrats who run the NDP, their fundamental commitment to capitalism and to private profit, over human rights and human need — whatever they may say in election speeches. Behind Horgan stands Justin Trudeau, ready to intervene when necessary, in support of the imperatives of big business. The lessons of this experience must be drawn and the fight for a socialist, labour-controlled NDP should be accelerated and invigorated.

At the same time, the fight in the streets must continue. Our task is to build even broader unity against the LNG project, and against the Trans Mountain pipeline.

Meanwhile, a victory of mass militant solidarity action has occurred. The gigantic tar sands project proposed by Teck Frontier, was cancelled. In the face of the gritty militancy of the fighters for indigenous rights and climate sanity, and the falling price of oil, the oil barons withdrew their application and killed the deal. This fight is not over. When it comes back, these largely young indigenous and Canadian militants aim to fight to win.