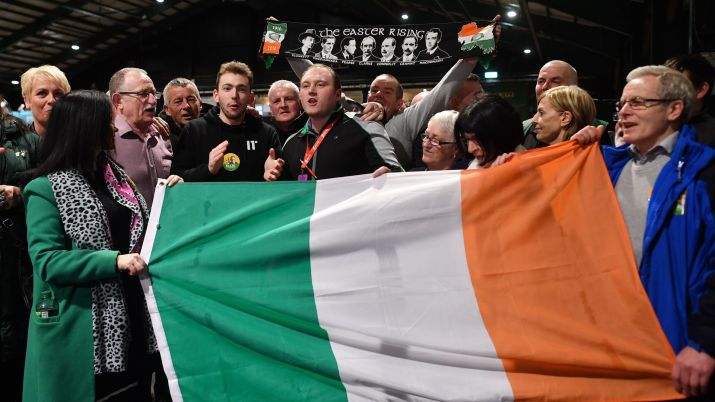 A second Sinn Fein government in Ireland will not advance the interests of the working class.

“All is changed! Changed utterly!” That’s the claim of many analysts in the wake of Sinn Fein’s election victory in the Irish state.

There are some grounds for optimism. Years of austerity, a recovery that left workers impoverished and central state services in collapse, have now bent the political structures out of shape. The ruling parties have received a minority vote. Sinn Fein has become the major party by vote share and the likelihood that the other parties will unite to exclude Sinn Fein and form a national coalition largely identical to the last austerity government would sharply escalate class tensions and lead to much greater political instability.

However many on the left are mistaking the wish for the deed and are producing carefully written ambiguity that diverts from many real and direct problems.

It’s reasonable to call the vote a left wing vote, but the definition of left as wanting more public investment and “radical change” is extremely dubious, as is the claim that the Irish party system has been demolished.

The logic is that a left vote that is a vote for Sinn Fein means that Sinn Fein is a left party, defined as “the party of choice for those who want to register their discontent.”.

However the picture becomes more confused later. The writer quotes Sinn Fein’s Eoin Ó Broin as listing a “hierarchy of objectives” meaning that Sinn Féin can tack towards the left or towards the center, depending on what seems most advantageous at the time, and goes on to say that

Sinn Féin is a left-nationalist party for which nationalism comes first.

However the article descends into obscurantism when it proclaims: “Sinn Féin’s time in government north of the border hasn’t resulted in any major social-democratic reforms”.

This fudges the issue. Sinn Fein has agreed the “Fresh Start” programme that is in the process of delivering eye-watering austerity in the North. The foundation document of the restored Stormont assembly; “New Decade, New Approach” promises even greater austerity.

” Sinn Féin’s success is a left wing phenomenon. The party campaigned on the need for massive public investment to deal with a dire housing crisis and a crumbling health system. Sinn Féin has eschewed anti-immigrant rhetoric; one of its TDs (MPs), Martin Kenny, suffered an arson attack after condemning racist activity. (The Irish far-right characterises Sinn Féin as “globalist”). The party supported both marriage equality and the repeal of laws outlawing abortion in recent referendums. Under proportional representation, Sinn Féin transfers also helped to elect members of smaller socialist parties.”

Hanley highlights the sustained attacks on Sinn Fein from the right around the issue of claims that the IRA (long decommissioned) was controlling the party and the intervention of Garda commissioner Drew Harris in support of the right. Harris is a former RUC officer and has been accused of covering up collusion between loyalist gangs and the British forces.

Hanley highlights the hopes for change among thousands of voters and, as with Dan Finn, speaks approvingly of Eoin Ó Broin’s zig-zags towards socialist rhetoric.

However in summation he is more realistic:

“Sinn Féin no longer says “socialist” in its literature and the more far-seeing of Ireland’s business community have been less hysterical about the election’s outcome than some commentators. Indeed Sinn Féin’s record in government in Belfast often reveals them to be ruthlessly pragmatic”.

Both analyses are examples of rigor compared to the reaction of Solidarity-People before Profit, the left group in the Dail (Ireland’s parliament). The group led the charge in voting for Mary-Lou McDonald for Taoiseach linking that to an appeal that she form an imaginary left government with them even as Sinn Fein lobby Fianna Fail for a place in coalition.

The left has now descended into fantasy, arguing that they can pressure Fianna Fail and Fine Gael into abstaining while they elect Mary-Lou McDonald Taoiseach, urging Sinn Fein to form a minority left government and warning that they will not support a “left led coalition” – the Shinners term for coalition with Fianna Fail. The coalition with the Democratic Unionist Party in the North can be put on one side because what matters is the sentiment among voters in the South.

The idea that you can anoint Sinn Fein as the left and then withdraw that absolution is madness. Illusions fed to workers now will disarm them in the future.

In a bizarre pantomime Fine Gael and Fianna Fail hold preliminary talks that lay the groundwork for a national coalition of the right. Sinn Fein demonstrates for a place in government with Fianna Fail at indoor rallys, Taoiseach Leo Varadkar denounces this radical step as insurrection and People before Profit, wearing an anonymous hat, organise a march for … change! … in practice a call for Sinn Fein in government.

Absent from all the discussion is any real acknowledgment of the actual practice of Sinn Fein. In the North, they not only support reaction and austerity, they are involved in corruption and patronage at all levels of the state and civic society. The homeless crisis in the North mirrors that

Their left turn in the South comes directly after a courtship of the Irish bourgeoisie, where they cosied up to British royalty and kowtowed to Orange reaction. Alongside the current left turn were a series of messages to the right, including calling for nationalists to join the Northern police, and walking back opposition to the draconian Offenses Against the State Act.

In all the brouhaha there is no examination of the actual proposals on housing. In fact, Sinn Fein’s housing policy is based on current investment policy placed on steroids, with substantial wealth taxes (the wealthy are those earning over €1million). Public land and infrastructure would be donated to developers who would then provide “public” housing leased to local councils and “affordable” homes subsidized by councils. The market model that dominates housing and that led to the current crisis is not addressed.

“At a time when left parties in Europe have been losing ground to their rivals on the Right and center, the Irish election bucked the trend”.

That’s not the case. Rather than the Irish coming early to the next left revival, they are coming late to a reformist wave across Europe that was based on the assumption that austerity could be reversed within the constraints of a capitalist economy. Those movements failed, and it is no surprise that that failure was followed by an advance of the right.

So, a protest vote clearly based largely on the housing crisis comes at the ebb of a struggle. The trade union movement organized a national Homeless and Housing coalition in 2018. In October of that year, under the banner of “Raise the Roof,” ICTU organized a major rally of the Dail alongside a Solidarity-PbP (People Before Profits) motion inside the Dail calling for the declaration of a housing emergency.

Although the government resisted the calling of an emergency, they did

bring forward a large budget aimed at housing. ICTU obviously believed that they had a deal, because from October on, the campaign was gradually run down. 2018 and 2019 saw occupations and in some cases the deployment of paramilitaries alongside state forces to enforce evictions, and in at least one case the use of significant force to evict bailiffs from property they had seized.

The Unions, PbP and Sinn Fein were at arms length in these struggles. The housing crisis would be solved in the Dail, within the constraints of the sovereign debt, strictures of the European central bank and the need to secure foreign direct investment.

The parliamentary road was not a platform for these struggles. It did not run alongside street protest. Rather, the reformists were embarrassed by the conflicts and looked to smother them. In December, the street action had shrunk to such a low level that the homeless themselves had to organize a protest on their own outside the strait jacket of the reformist groups.

The boiling up of sentiment around the Sinn Fein vote is driven by the belief that the vote is an opportunity to move forward. Yet it is that opportunism that has smothered a living movement on housing.

The truth is that the housing crisis is not on the cusp of resolution.

Sinn Fein is a capitalist party. Its programme exists within the constraints set by Irish capital and is subservient to the domination of imperialism.

The Dail is the instrument of capitalism and imperialism. While it is possible to intervene in that forum, it should be as the representatives of an independent working class movement. It doesn’t work in the opposite direction — from the Dail to working class mass action.

The Irish housing crisis will not be resolved without challenging existing property relations, without expropriation and, most of all, without a working class movement willing to act independently and defend themselves.

The vote for Sinn Fein implies discontent with the political system. It also expresses despair at an unending struggle for survival that continues despite claims of recovery. Any opportunist falling into line behind Sinn Fein will lead to disappointment and further despair.

The opportunity is to address workers. It points to the limits of their traditional leaderships and calls for self-organization around direct action to seize state resources being sold off by vulture funds. It underscores the demand for mass public housing provided by the state — noting that if they fail to respond, we must replace the state.