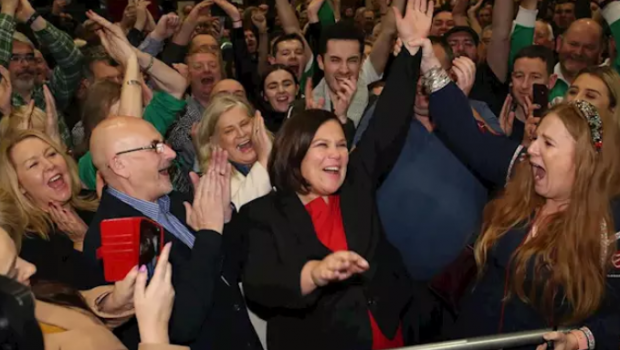 Sein Fein were expected to do well in the recent Irish general election. In the event they topped the poll, reviving the old call Tiocfaidh ár lá! (Our day will come), and bringing chaos to the Irish governmental system.

However if we take a step back we see many other examples across Europe of emergent parties coming to power and promising an end to austerity, only to move to the right. Podemos in Spain, Syriza in Greece and many others.

Podemos has come to Ireland,  but it is a long road from here to the Worker’s Republic

The Fine Gael minority government had called the poll days before they were about to lose a confidence vote on the state of the health service,  having just survived a vote on their response to a massive housing crisis and against  a backdrop where proposals to commemorate the Black and Tan forces  that savaged Ireland during the war of independence had led to popular protest. It became evident very quickly that voters were out for revenge.

In the event Sinn Fein’s opponents were devastated and the party itself amazed when it received the largest share of the popular vote. The battle for government, normally between the right wing Fine Gael and the more populist Fianna Fail,  was now for the first time split evenly between 3 parties.

What had she done to achieve this result? The answer is nothing. The manifesto offers few clues.  It promises to solve a plethora of major issues, including housing and health, but a number of parties made similar claims.

The truth is that the Irish electorate voted Sinn Fein because they had no choice.

In order to understand why you have to look at the structure of Irish politics.  Political power is divided between two capitalist parties, Fine Gael and Fianna Fail,  with Fianna Fail the more populist wing of capitalism. Historically the trade unions have operated partnership agreements with Fianna Fail.  They supported the small labour party,  not in an attempt to form a labour government,  but as cover when Fianna Fail were out of power. With labour in coalition partnership with the far right and pro-imperialist Fine Gael could be accepted.

In this election Fine Gael were the target of popular wrath. The normal pattern of events would have seen a swing to Fianna Fail.

That didn’t work. Most people remember that party’s love affair with the bankers that bankrupted the country. The recent minority government was held up by a “confidence and supply” agreement endorsed by Fianna Fail,  so their attempt to emerge as the opposition was likely to fail. The only other minor party of government, the Labour party, was remembered for its attacks on workers when last in coalition and went down in flames. Joan Burton,  who led an attempt to jail water charge protesters,  lost her seat.

There was nowhere else to go.  Workers wanted change. Sinn Fein’s role in the Northern state was not considered.  In the South they were seen as a party of the left, a view endorsed by the socialist groups, and people wanted a radical change from the grinding housing crisis and the collapse  of public services, made worse by claims that austerity was over and that they had never had it so good.

Sinn Fein’s vote outstripped the major parties. They only had 42 candidates because of poor performance in recent elections, and as a result had massive surpluses that helped elect smaller left groups. The only other party to show significant gains was the Green party, who gained from climate concern, with history erasing their own role in coalition during the credit crunch.

The claim of one successful Sinn Fein candidate was that the party had broken the Free State, referring to the domination of Irish capitalism through the two party system.  That’s a dubious claim. The next period will involve a new Dail coalition,  but the Dail will remain the Dail and Ireland will remain partitioned.

Sinn Fein’s victory is in part due to a perceived left turn in their manifesto, but in reality they are a capitalist party with a long history of speaking out of both sides of their mouth. They did badly in previous elections when they directed their attention to the middle classes with a glad-handing of unionism and British royalty and in the new turn, when they promise to solve social issues, there is much to question. For example, they promise 60 000 new houses, but these are affordable houses built by private contractors.  They promise a rent  freeze, but rents are so high they would have to be savagely cut.

Despite the left turn a main concern continued to be reassuring the other capitalist parties that they were fit for government.

The return to a local administration with the Democratic Unionist Party in the North to enforce savage austerity was seen as precondition for Dail government, as was support for recruitment to the northern police,  a frantic cover up of their past slander of a young IRA victim, and a step back from opposition to the draconian powers in the South’s Offences Against the State Act.

A new contradiction has arisen as a result of the election. A majority of the Irish population support a United Ireland. Many, including Sinn Fein members, believe that they will now press the case.  Sinn Fein made a great deal of noise about a border poll before the election. In reality they were calling for a poll in 5 years time inside the confines of the Good Friday Agreement, where the British have the final say. Now they have kicked the issue into touch, with meaningless calls to Britain and Europe to take action. Even victory chants of up the IRA are hushed up  although Sinn Fein’s history is as spokespersons for the IRA.

Brexit did not arise as an issue in the election. It was believed that the taoiseach, Leo Varadkar,  had protected irish interests in accepting a side deal and Sinn Fein proclaimed the arrangement as a step towards a United Ireland.  Now Boris’s new secretary of state in the North, Brandon Lewis, has proclaimed that there will not be a border in the Irish sea. Varadkar, by accepting British assurances, has left the way open to reinforced partition and Sinn Fein has supported him.

After the election there has been a new swing left with meetings, discussion and media chatter about a “Left government” – a coalition of Sinn Fein with other small parties. This is sheer fairy dust. The numbers and political cohesion that would make this possible simply don’t exist.

In the process the contradictions of left government, the central strategic element advanced by the left reformist parties, were exposed. Labour sank the idea by saying that they would not join in. A coalition with Labour? One of the main agents of austerity? If Labour were being considered what does left mean? Many of the independents who would have to be included are to the right of labour. People before Profit’s delegates to meet Sinn Fein included northern MLA Gerry Carroll.  If PbP were in a coalition with Sinn Fein in the South, would Carroll be allied with them in the North? Would he then support the austerity package they are instituting there?

The Greens will join any coalition. If we restrict ourselves to the reformist socialists then there are other contradictions. The socialist groups are united only to obtain resources in the Dail. The Solidarity group, front for the socialist party, split recently around their orientation to Sinn Fein.  The original group, fronted by Ruth Coppenger,  violently hostile to republicanism, lost her seat. Paul Murphy,  with a softer approach,  survived on the back of Sinn Fein transfers, as did the majority of People before Profit candidates.

It was this group above all,  following a line established decades ago by the communist party,  that touted a left government based on Sinn Fein. Now they are hoist by their own petard.  A sharp break with the Shinners will see the loss of vote transfers. Support will see more Sinn Fein candidates and again a loss of transfers.

The left party idea survived for a day. Sinn Fein are lobbying Fianna Fail for a chance in government while PbP lobby Sinn Fein. The song “Don’t marry her (have me)” comes to mind.

In reality the terms left and right here mean very little. The parties are on a spectrum between fiscal responsibility and Keynesian borrowing and a wealth tax,  with Fine Gael at one end and Sinn Fein and the socialist groups at the other. No one has stepped outside the constraints of the sovereign debt or the strictures of the European central bank.

Barring the unlikely scenario of a new election,  the choice for Irish capitalism is straightforward. Form a government of national unity excluding Sinn Fein with some increase in public spending, or incorporate Sinn Fein and strangle popular revolt through budget constraints for which their ministers would carry the blame.

If all the constraints on public services and public welfare could be met then the capitalists would have met them. The interests of the bankers,  the speculators, Europe and transnational capital came first. In their arrogance Ireland’s rulers joined in the plunder themselves and assumed that there would never be any response. Now we face deep instability and none of the proposed coalitions can meet more than a fraction of the expectations of workers. The issue is: will the workers deepen opposition or become demoralised?

The coming struggle cannot be resolved in the hostile territory of the Dail. Workers are reduced to spectators and it is noticeable that years of parliamentary activity have sharply reduced the level of direct action by left groups. We already have an example of such action during the election when teachers took widespread strike action to protest the continuation of lower rates of pay for entrants recruited after 2011.

Socialist should draw up an action plan based on an election that demands an end to austerity.  The demand to end exploitation of the workers is now bound to a democratic demand to respect the massive mandate given to Sinn Fein in the election and the demand for an end to partition. We should call on Sinn Fein, the unions and the socialists to join us on the streets and apply a strategy of working from above and below. For example on the issue of housing the Apollo House strategy of some years ago, of linking calls for government action to the actual seizure of public and hoarded property,  should be revived.

The Irish election is a local case study of a phenomenon seen elsewhere in Europe. Old political structures decay as they struggle to wrest more resources from the working class. New parties spring up and promise to work through parliament to restore the more favourable conditions of yesterday.  They fail because of the limits of parliament and because they are themselves not socialist and the issues that confront us cannot be resolved inside the capitalist system.

Our version of Podemos, the formerly radical Spanish movement that has just joined a reactionary government,  has finally reached Ireland. It has brought new crises and instability. If the workers do not organise independently the moment will slip away.