Skip to content
Comrade Cory D. spoke for Socialist Action Canada to about 350 people at a rally held in Toronto on January 4 to protest the U.S. assassination, in Iraq, of Iran military commander Qasem Soleimani.  See the attached video and photos.
About ten members of SA, with red flags, were joined by members of several other leftist groups and representatives of unions and the NDP.  Beaches-East York NDP MPP Rima Berns-McGown also addressed the crowd.  A tiny counter-demo of Trump supporters failed to disrupt the anti-war protest as they were held off by rally marshals and police, across the street from the U.S. Consulate on University Avenue.
CP24, NOW magazine and other mainstream media interviewed Corey, Garv T. and others.
Organizers announced plans for a protest to be held on Saturday, January 11, from 12 to 2 p.m.  In the event of a full-scale war, people are urged to rally at the same location on that day, or the next day, at 5 p.m.
No War with Iran!  Drop the Sanctions!  All U.S., Canadian, EU and allied troops Out of the Middle East!  Canada Out of NATO!  End all investment and trade with Saudi Arabia and Israel!  Imperialist Hands Off Iran!
Here is the link to the video and below the Pix from facebook 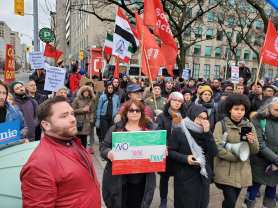 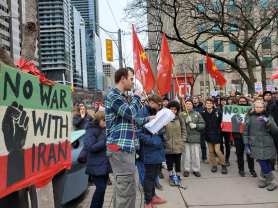