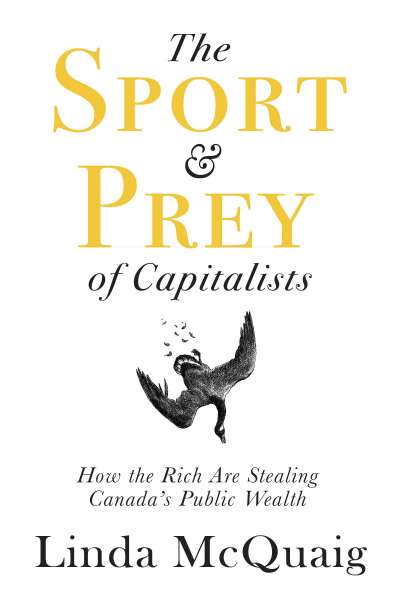 A review by John Orrett

Linda McQuaig’s new book, “The Sport and Prey of Capitalists, How the Rich Are Stealing Canada’s Public Wealth” (2019, Dundurn Publishers, 264 pages), exposes how Canada’s economic elite privatize public companies to increase their wealth to the detriment of the public interest.  It follows her national best sellers ‘’ Shooting the Hippo: Death by Deficit’’ (1995), and “The Trouble with Billionaires’’ (2010) co-authored by Neil Brooks. They all challenge the pervasive myths of neo-liberal economics.

McQuaig is a distinguished journalist, columnist, public speaker and aspiring politician. In 1989-90, in the Globe and Mail, she exposed an illegal political donation scheme, dubbed the Patti Starr affair, that benefited the Ontario Liberal Government of David Peterson, contributing to his electoral defeat and victory of the first New Democratic Party government in Ontario history in 1990.

She ran for the NDP in the federal elections of 2011 and 2015, finishing second to Foreign Minister Chrystia Freeland and Finance Minister Bill Morneau respectively, the most powerful figures in Prime Minister Justin Trudeau’s cabinet.

Her new book reads like a big business espionage novel.  The sad reality is that the described rip-off of the public is true. It is a captivating read.

One chapter documents Ontario’s sell-off of Highway 407 in 1999. Then-Conservative Premier Mike Harris vowed to balance the budget.  With an election looming, Harris leased the highway for 99 years for a meagre $3.1 Billion dollars to appease Conservative voters and reward his big business clientele.

The cash revenue Hwy. 407 produces is so high ($1.4 B in 2018) that it was valued by Standard and Poor as being worth $8-13 billion four years later. McQuaig writes that the National Bank valued the Highway at $27 billion.  Since the publication of ‘’The Sport and Prey of Capitalists’’ that figure is proven to be spot on.

On Oct. 31, 2019, SNC Lavalin’s third quarter report detailed the sale of its 10% interest in Hwy. 407 which netted $2.9 Billion, making the highway’s valuation $29 B. This is the SNC Lavalin who’s former top executives face fraud and corruption charges. Meanwhile, Ontario taxpayers and car-driving toll payers are being fleeced.

When the Ontario Liberal Party came to government in 2003, they continued privatization by selling 60% of Hydro One for $9 Billion in 2013. This former crown jewel of Ontario’s capital holdings, was public since 1906 and indispensable to the industrialization of Canada’s manufacturing heartland. It was sold to pay for public road construction – akin to stealing from Peter to pay Paul. Meanwhile, the Treasury forgoes millions of dollars of long- term revenue from the electric utility.

The Liberals disavowed building public hydro generation, substituting contracts with private firms to build natural gas-fired plants. This cost the province billions of dollars in scandals and law suits when Liberal Premier Dalton McGuinty cancelled and moved the gas plants to avoid losing Liberal seats in the election of 2011.

The federal election on October 21, 2019 resulted in a Liberal minority government featuring big regional divides. Some of the issues central to the campaign are discussed in this book. Foremost is the question of carbon energy development in Canada. Oil-rich Alberta and Saskatchewan want pipeline expansion to get their products to market. British Columbia and many indigenous peoples are against the Trans Mountain Pipeline which would bring the world’s dirtiest oil to tanker ports on an already busy seaway off Vancouver Island. It would triple existing capacity, just to support more extraction of eco-disastrous bitumen. A moratorium on tar sands extraction, not expansion, is needed.

The Alberta and Saskatchewan provincial governments claim that the Federal government is hampering their economies by preventing the maximization of resource extraction. McQuaig demolishes these arguments by showing they are to blame for their own predicament. For decades those provinces gave Big Oil tax breaks, collected low royalties, and failed to bring this natural resource into public ownership. She compares this failure to Norway, which through its publicly-owned oil company, Equinor, has been able to store over a trillion dollars of revenue from their North Sea oil fields, 60 times the peak amount of the Alberta Heritage Fund.

Saskatchewan had a public oil company, Saskatchewan Oil and Gas, which it privatized. Canada owned PetroCanada, but this was sold to private interests.  In so doing, governments lost the ability to capture and re-direct billions towards a vibrant renewable energy industry.

Pharmacare was another big issue in the recent election. The NDP argues that life-saving drugs should be obtained with our health cards not our credit cards; that Pharmacare should be an integral part of Medicare. McQuaig notes that Canada had a publicly owned pharmaceutical producer with a rich history. After the discovery of insulin, Connaught Labs played an important role in the development and public availability of the drug. Connaught was also involved in research and production of anti-toxin Diphtheria serums, small pox and polio vaccines and many others.  It is a storied history replete with innovations and discoveries of global significance — before its privatization.

Public pharma care could be the single-payer for prescribed medicines and a bulk buyer and distributor of them.  McQauig adds, ‘’We might also consider establishing a publicly owned pharmaceutical company that could produce generic drugs and other drugs rejected as insufficiently profitable by private industry.’’

During the election the Canadian Union of Postal Workers advanced the idea of Postal Banking, but the NDP offered little support. McQuaig reveals that the Post Office Savings Bank had hundreds of branches in Canada until its liquidation by the federal government in 1968. Our ruling elite seems to be allergic to public banking.

From 1938 until 1974 the Bank of Canada, a Crown Corporation was the prime lender to the Provinces and the Federal Government, financing major infrastructure like the TransCanada Highway and the St. Lawrence Seaway. Since then, lending has been primarily through the Big Six private oligarchic banks in Canada – shifting enormous wealth into their vaults.

Even worse, McQuaig warns taxpayers that the new Canadian Infrastructure Bank, established in 2017, will encourage private hedge funds and investment firms to participate with the Federal Government in giving loans to large infrastructure projects. But these loans will be at higher rates of interest.  This innovation “is aimed at contriving new ways to secure extremely large profits for themselves, with little regard for the consequences”.  More importantly “perhaps the real problem is that the bank will give private investors — even foreign-owned entities like BlackRock – the opportunity to actually own large pieces of Canadian infrastructure. This is privatization through the back door.”

The book documents many more examples of how the privatization of public wealth results in greater inequality. McQuaig provides many reasons why the NDP and the labour movement should adopt a socialist platform, fight privatization, turn the tables on rich and powerful blood suckers, and take back what was once our public wealth, and more.