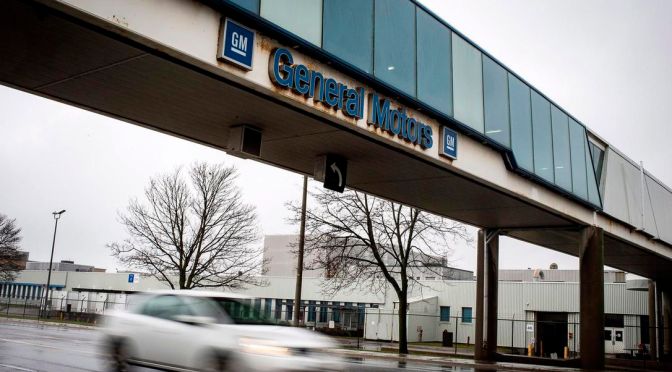 The joyous forecast coincides with announced plans by the auto giant to halt production at five factories in North America and cut about 14,000 jobs in the company’s most significant restructuring since its bankruptcy and taxpayer bailout in 2008 by Stephen Harper and Barack Obama.

GM warned last summer that the trade war instigated by President Donald Trump could force job cuts in the United States. Trump was irate with GM, tweeting that he was “very disappointed” with the company and CEO Mary Barra for plans to idle plants in Ohio, Michigan and Maryland.

“Nothing being closed in Mexico & China. The U.S. saved General Motors, and this is the THANKS we get,” Trump wrote. But the Donald misses the point. Just like him, GM does what makes the most profit. It is moving to production of autonomous EV vehicles.

GM has a plan for the estimated $6 billion to be gleaned annually from the plant closures. The all-electric, fully automatic, no steering wheel, no-pedals version of The Bolt is supposed to be on public highways by 2019.

However, what the world really needs is non-polluting buses, street cars, trains and ships. Mass public transportation and shipping. Left to private, profit-motivated companies, the massive waste embodied in private cars will continue. GM makes more money that way. The only way to get the efficient public transportation systems we need is to nationalize the vehicle business and retool the existing hi-tech, modern plants. That way workers can be retrained, not scrapped. Workers know everything about building cars. They can manage the factories. The owners’ skill is in siphoning off profits and spiriting them away to low tax havens. We simply do not need that skill. Let’s throw the bosses on the scrap heap.

GM, over its history, has a long, very shabby, anti social record. It has been a leader in some pretty bad causes. They include: the fight against regulations to enforce auto safety for consumers, the battle against safety for its employees, and against environmental safety for the human race. GM led the resistance to greater fuel efficiency laws aimed at reducing greenhouse gasses emitted from engine exhaust pipes. Generations ago GM led a consortium that bought street car lines, ripped out the tracks, set up bus systems and sold them. It also bought the rights to an electric car and stifled it decades ago. GM, quite simply, is a capitalist corporation that operates exclusively for private profit. It has committed crime after crime to that end.

Under capitalism, the doctrine of individual ‘liberty’ asserts the absolute right of capitalists to make ‘free’ decisions about their property, entirely in their own interests, even when it throws thousands out of work, leaves children without support, and causes the collapse of whole communities. Their liberty is simply imposed on workers and their families without their consent.

What about our ‘liberty’ as workers? Up to November 27, the Canadian Union of Postal Workers conducted rotating strikes against Canada Post, a Crown Corporation, opposing management-imposed speed up, compulsory overtime and pay discrimination against rural, mostly female mail carriers. The Liberal Government of Justin Trudeau and the ‘opposition’ Conservative Party worked smoothly together to violate the workers’ ‘liberty’ to withdraw their labour, their right to free collective bargaining, including the right to strike, and ordered the workers to end their job actions or face stiff fines.

Bosses can impoverish thousands of workers, but workers can’t even slow down the mail, including the packages shipped by brutally low-wage employers like Amazon. Only the labour-based New Democratic Party spoke loudly against the move. NDP MPs walked out of the House of Commons in protest. So much for workers’ ‘liberty’.

The Conservative government in Ontario, Canada’s most populous province, under Premier Doug Ford, a hard-right winger and scion of a rich family, has moved quickly since June 7 when it was elected. His Progressive Conservative Party attained 61% of the seats with only 40.5% of the votes cast in the first-past-the-post electoral system. The voter turnout was only 58 per cent.

Ford has stripped many rights and statutory benefits from Ontario workers, cancelled the planned increase to a $15/hour minimum wage, cut welfare increases and made disability benefits harder to obtain. Under his slogan “Ontario is Open for Business” he is forcing workers to labour under deteriorating wages, benefits and working conditions, fostering a level of desperation most convenient for the Walmart and Amazon tycoons. He seems to think he has every right to destroy the hard-won gains of workers.

But he says he can do nothing about the GM plant closures and accuses federal politicians and union leaders of peddling false hope to the workers.

UNIFOR, Canada’s largest private sector union with 315,000 members, represents about 25,000 autoworkers including the 2,500 in the GM Oshawa plant. Jerry Dias, UNIFOR President, demands that Trump and Trudeau impose a 40 per cent tariff on GM cars made in Mexico. His line is to support his Canadian members by imposing cuts on the lower paid Mexican workers. A spokesman for Trudeau said Dias’ proposal was not discussed with Trump.

Dias also says he may urge a mass autoworker walkout from all Canadian and US plants, but a United Auto Workers union spokesman in the US says his union has no such plans. Actually, a walkout is an excellent idea. But the American labour brass is even more ossified that its Canadian counterpart. The UAW still supports the capitalist Democratic Party instead of setting up an independent labour-based political party like the NDP, which the Canadian union bureaucrats dominate (although Dias and UNIFOR have backed the Liberal Party of late, with bitter results).

Dias’ proposals simply have no weight unless he gets the backing of the workers themselves. The leaders of UNIFOR like to parade as the workers’ saviours. This highly paid, privileged layer of union bureaucrats can make a big noise; however, they bargained away hard-won worker gains like equal pay and good pensions. They accept the so-called rights of the owners to do as they please and fear the power of a mobilized union rank and file.

In the end, it is only the mobilized rank and file that can force action by GM and by the capitalist politicians. Mobilizing the mass power of the auto workers and of other unions in solidarity can bring home the point that workers together can stop production, choke profits, and force boss concessions — instead of making concessions themselves.