For the second summer in a row, Socialist Action in Toronto hosted Socialism in the Park at the famous Christie Pits.

The series of three presentations and discussions took place on Wednesday evenings, July 26, August 2 and August 9. Presentations were given by Mitchell S. spoke on “Origins of Class and the State”,  “Permanent Revolution, Stalinism and the Transitional Programme” by Julius A. and “Socialism in Canada – an introduction to socialistideas” by Yasin K. 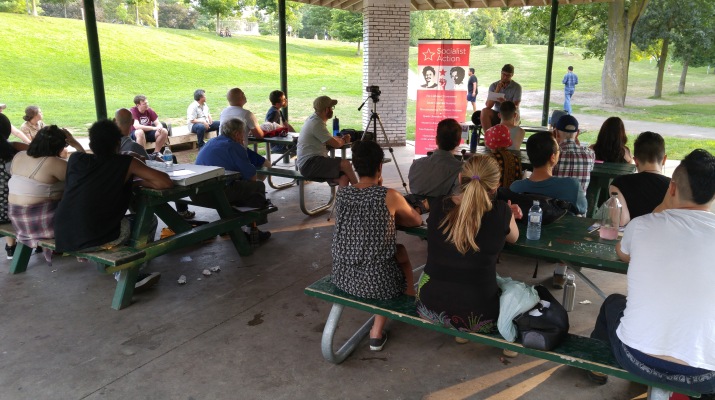 Attendance and interest surpassed expectations. Despite rain on the first two occasions, the turnout averaged close to forty people.

Lively discussion followed the main talk each time.  Socialist Action members answered many questions, supplemented by great contributions from folks in the audience.  Not only SA members, but activists from other socialist organizations and backgrounds participated as well.

Indeed, discussions were so enjoyable that they continued informally late into the night at a nearby pub.

This is a time of growth for the radical left.  The appetite for an alternative to Trump and Trudeau, to inequality and injustice, is palpable.  Each week people, especially young workers, are signing up to join SA.  We look forward to working closely with our new members, and planning greater outreach with Rebel Films, with our activities in unions, the NDP, international solidarity, anti-fascist/anti-racist rallies, and yes, with Socialism in the Park next year!