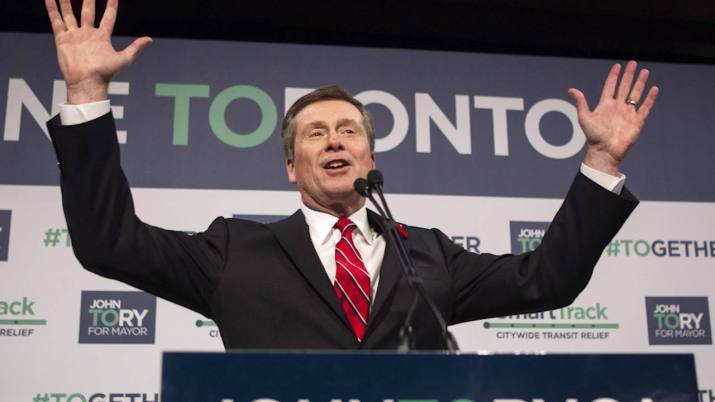 Chow snatches defeat from the jaws of victory
by Barry Weisleder
Big business scored a big win in the October 28 Toronto municipal election. While voters rejected the mayoral bid of ultra-conservative, bully-Councillor Doug Ford, they put Bay Street big wig and corporate fixer John Tory into the top job in Canada’s biggest city. Ex-New Democrat MP Olivia Chow marginalized herself with one of the least effective city campaigns in memory. Doug Ford was a last-minute stand-in for his drug-addicted, cancer-afflicted, younger brother Rob Ford. For four years, Rob was Toronto’s right wing populist rogue mayor, and the butt of international late night TV comedy. Tory won with 40 per cent of the city-wide votes cast. Ford attracted 34 per cent, and Chow trailed with 23 per cent. The turnout was 61 per cent — a significant rise from 51 per cent in 2010. In Mississauga to the west, only 36 per cent bothered to vote. At his victory party, John Tory, who was briefly leader of the Ontario Progressive Conservative Party, and for a longer stint was CEO at the Canadian Football League, crowed that the result put an “end to the division that has paralyzed City Hall.” The strongly pro-Liberal Party Toronto Star seemed to agree, hailing the “return to normalcy”. A look at Tory’s platform reveals that it has much in common with the Fords’ agenda — minus the soap-operatic drama. Tory pledged to privatize garbage collection on the east side of the city, following the Ford union-busting initiative west of Yonge Street. Tory promised no new taxes on the rich. He offered no social housing construction plan, and no measures to alleviate poverty and hunger in the city. His answer to traffic congestion, now at epic proportions, is a pie-in-the-sky scheme that involves borrowing billions and hoping for higher property tax revenues at future rapid transit stops. 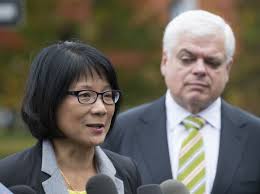 Olivia Chow, widow of deceased federal NDP Leader Jack Layton, led in opinion polls from January to June, but faltered over the summer months. Chow’s vacuous message “New Mayor. Better City.”, and her weak style, led establishment and middle class forces, who were desperate to purge Toronto of the Ford embarrassment, to rally behind John Tory’s “sensible” option. It is no wonder that the two campaigns were so similar in their blandness. Chow’s was run by Liberal and NDP honchos. Tory’s was headed by Conservative and Liberal wags. It was a difference without a distinction. Chow shifted slightly to the left after Labour Day. She advanced the idea of a higher property transfer tax on residences that sell for over $2 million. But it was too little, too late. For ten long months she said nothing about police racial profiling and deadly shootings by cops, nor about the imminent flow of environment-threatening bitumen through pipe Line 9 across the top of the city. Chow followed in the footsteps of Andrea Horwath, the Ontario NDP Leader, whose Spring provincial election campaign failed in similar ways. Their common error: fiscal conservatism that alienates a left working class base, while proving unable to win support among the affluent or in business circles. The composition of the new city council is not unlike the outgoing one. Thirty-six incumbents were re-elected to fill the 44 council seats – producing a snake pit of hard line conservatives, compromising liberals, and soft-on-austerity New Democrats. In other words, the neo-liberal agenda of cutbacks and privatization is alive and well. Residents and workers face four more years of battles against austerity measures, while poverty, violence and congestion increase.
The election was also a magnet for racism, sexism and homophobia, which ‘Ford Nation’ steadily

excreted and excused. Among the targets were Chow, councillor Kristyn Wong-Tam (an open lesbian, re-elected in Ward 27) and school trustee candidate Ausma Malik (elected in Ward 19). Most Torontonians rejected bigotry, but did so in a neo-liberal context that defined the political alternatives as ‘progressivism’ versus ‘conservatism’, rather than posing class against class, or socialism versus capitalism. What should the workers’ movement do in such an untenable situation? Demand a break from the disastrous political treadmill of vacuous ‘progressivism’, which is just a cunning mask for capitalist austerity. Launch the fight for a Labour City Hall, based on direct action and socialist policies. The first step, as we argued two years ago, and earlier, is to demand that the NDP and Toronto and York Region Labour Council convene a mass municipal political action convention. Such a gathering should be held in 2016. It should shoulder the task of adopting a Workers’ Agenda and selecting a team of candidates for all city offices who will be accountable to working people through their mass organizations. Now is the time to start moving forward on this course, while mobilizing in the streets and communities against the coming attacks sure to emanate from a city hall that operates more and more like a subsidiary of Corporate Canada.

SA candidate got 9% in Mississauga

Socialist Action candidate for School Board Trustee in Mississauga Wards 3/4, Evan Engering, received 1,322 votes, 9 per cent of the total votes cast in that election race. This is the first time Socialist Action, founded in 1994, presented a candidate in an election for public office. Evan Engering, a leading member of Youth for Socialist Action, a young worker and a member of UFCW, is now a student at Sheridan College. His campaign relied on social media, a web site, a cable TV appearance, and a modest leaflet — with no funds for lawn signs, a campaign office, or flashy advertizing. But when over one thousand people in a working class section of Mississauga vote for an openly socialist candidate it is no fluke. It demonstrates a real interest in radical change. Socialist Action will soon explore the extent of this new attraction to socialist ideas by hosting a public meeting in the community 20 minutes west of Toronto.