Skip to content
Picket Tory Minister to Defend Postal Services
All Out September 20! 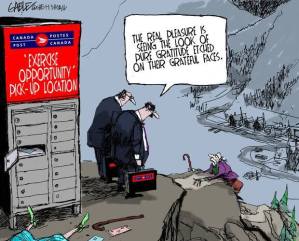 The scheme to degrade postal services, to alienate the public towards them, serves the goal of gutting the federal public sector. Within that framework, the rulers strive to trash good jobs, slash postal workers’ pensions, and to break a progressive, democratic union. It is a road that leads to selling the most profitable parts of Canada Post to private sector vultures.
This brazenly broad assault must be stopped. It is a watershed moment for public services and for the workers’ movement across the Canadian state. The need for public resistance is urgent. Protest activity is developing across the country, with rallies, pickets and town hall meetings. Many municipal governments, including Toronto’s City Council, have voted to oppose the replacement of home mail delivery with collective mega-mail boxes.
September 20 is part of that resistance. The message to Eglinton-Lawrence MP Joe Oliver, the Tory Minister of Finance, is that his Conservative federal budget which aims to slash jobs and kill vital public services, while pampering the corporate elite, is unacceptable.
Joe Oliver voted in Parliament against the New Democratic Party motion to maintain door-to-door mail delivery. Seniors and people with mobility problems strongly oppose being forced to collect their mail at a so-called ‘community mail box’, blocks from home, under all kinds of weather conditions.
The resulting elimination of up to 8,000 letter carrier jobs would be a serious blow to young people and to many others seeking decent-paying employment in a time of great economic stress.
Canada Post is not in debt. And it could be even more profitable as a public asset if it provided banking services at postal outlets across the country. Canada Post and the Tory government suppressed a study that shows how providing banking and other services is the way forward. To the consternation of the vast majority of Canadians, the Tories are stealing workers’ pensions, while cutting jobs and services.
If this is the best that the Harper Conservatives have to offer, then they must go. If this is the best that capitalism has to offer, then it too must go. If Canada Post CEO Deepak Chopra, and Prime Minister Stephen Harper cannot run a postal service to meet human needs, they should step aside. Let postal workers show you how to run the service – under workers’ control.
Take notice Deepak Chopra, Joe Oliver and Stephen Harper: This fight 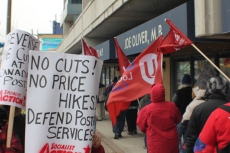